Here’s the test from a year ago. Speedtest is roughly symmetrical, as is Cloudflare’s more extensive (and useful) test between my place and their Twin Cities location. 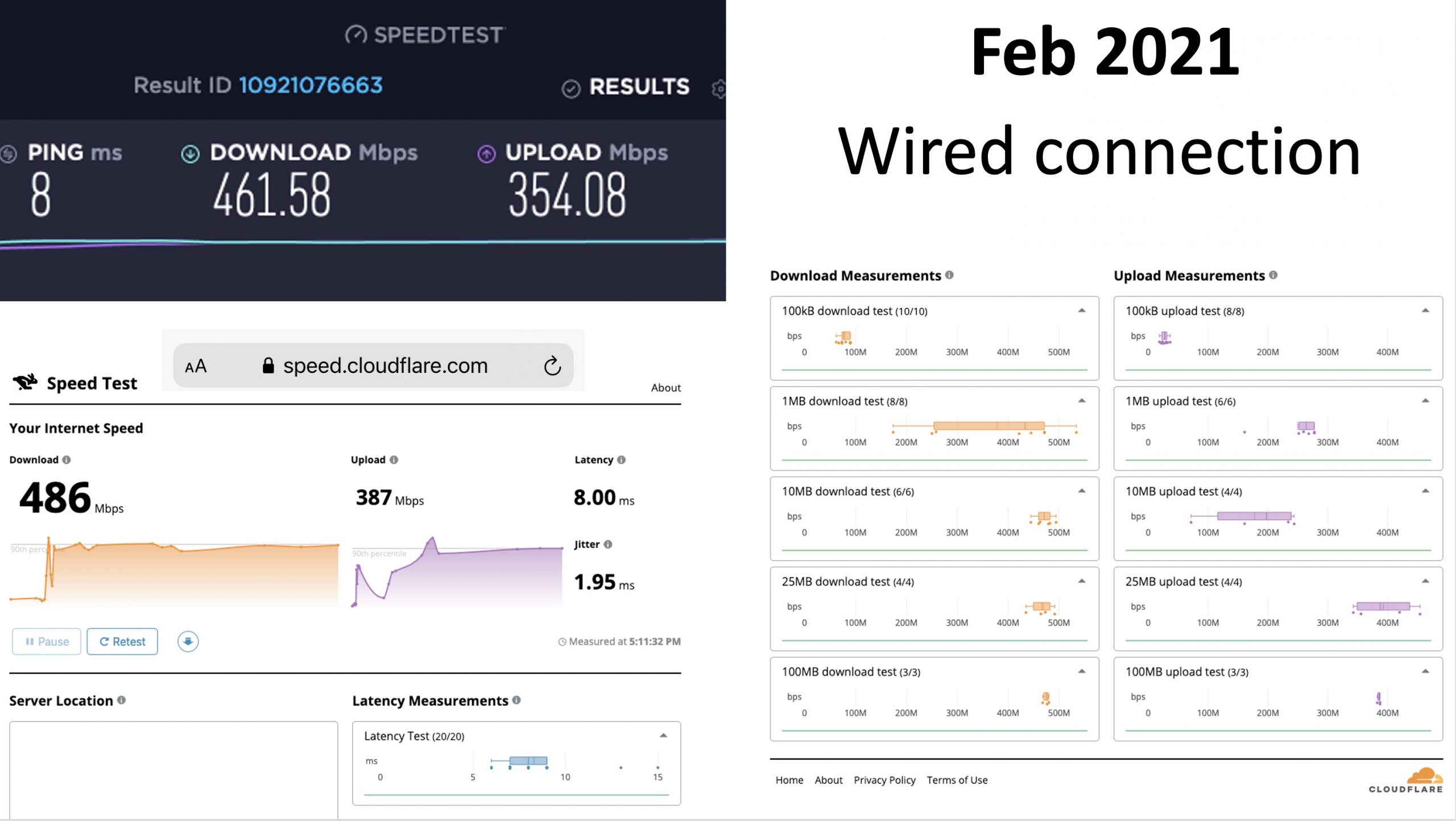 Here are the same tests as of this morning.  Same computers, same place in the LAN, recently-restarted router, switches and hubs, same computer, same cables.

Very similar results from Speedtest.  But Cloudflare tells a different story.  My traffic is now being routed to Cloudflare-Chicago rather than Cloudflare-MSP (confirmed with a plain old Traceroute).  Download speed is comparable but upload speed is now substantially lower. 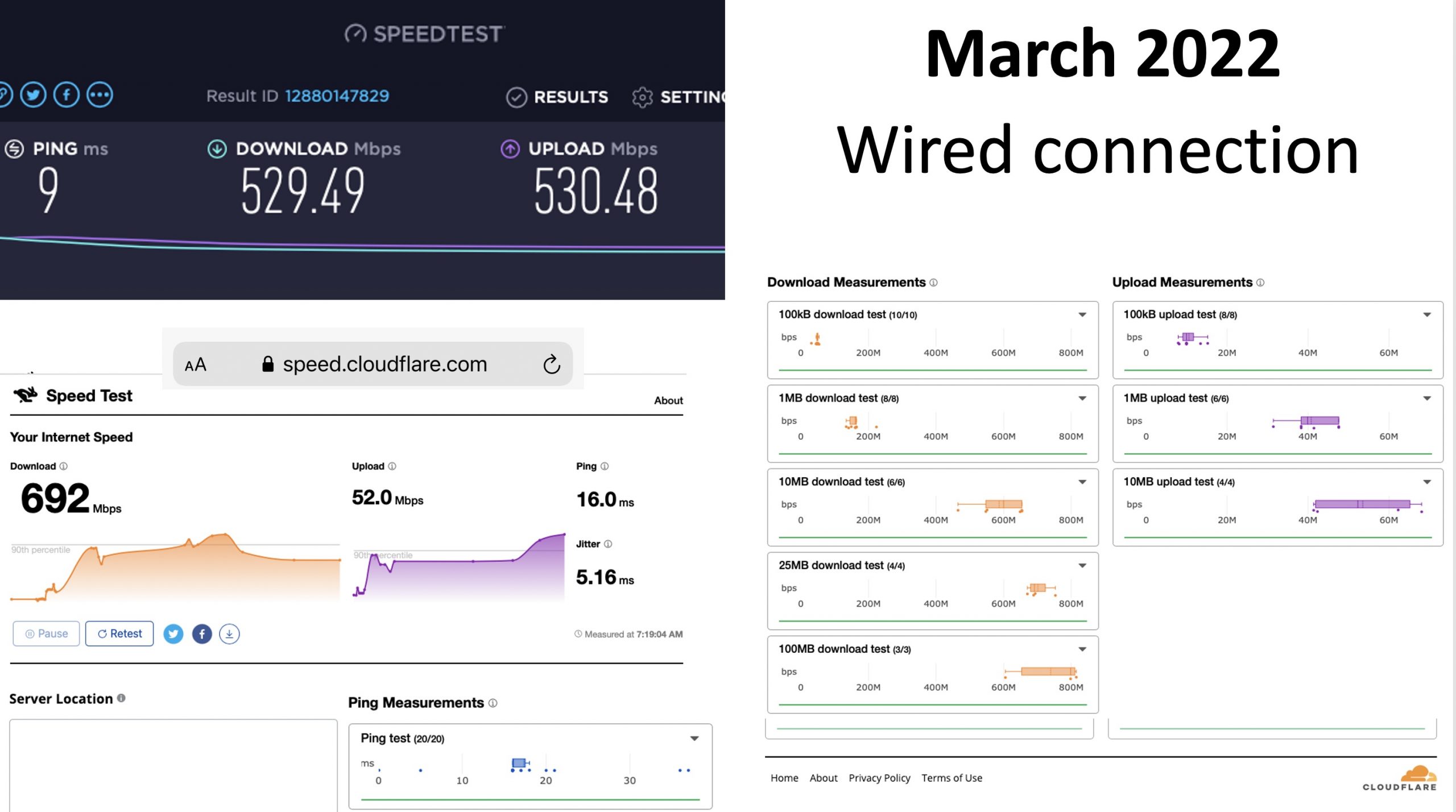 This could be caused by all kinds of things.  Here are possibilities that come immediately to mind.

Something has changed.  I don’t believe anything in my network or use has.  So I’m trying to figure out where the problem is and get it fixed.

Today I decided to try some other speed tests to see if this is just an artifact of Cloudflare’s methodology.  Here are a series of screen grabs of them.

Baseline is Ookla, which is…  Ookla.  It’s test is weird in many ways that I doubt regulators comprehend.  As always, it’s perfect.  Weirdly perfect.  In addition to the screen-grabbed test, I tried some other locations:

But here are all the rest.  First up is Cloudflare — after running all the other ones, I understand why Cloudflare’s methodology is so hard on my current configuration.  It quits pretty early in the slowly-increasing uploads.  Some of the following tests are a little more patient and give better readings.  And, as you will see in the subsequent update (about the new draft internet standard for network testing), it may be a little too demanding in its latest configuration. 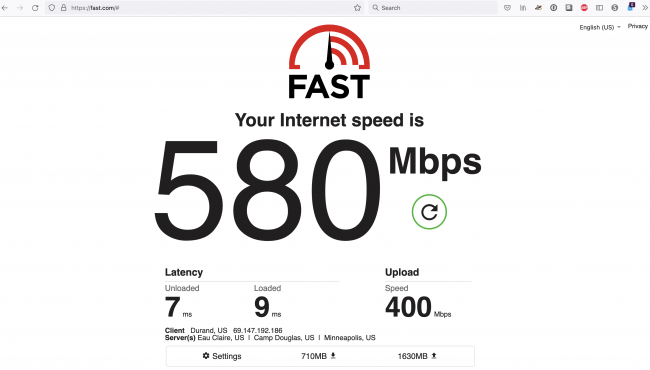 Update — March 23th, 2022 — New RFC for network testing — and the discovery that MacOS Monterey has a built-in network testing tool that conforms to that draft-standard.

Here’s a link to a new internet draft standard for IP performance measurement called the “RPM test.”  This is the Abstract.

Better yet, a working version of this tool has been included in Apple’s newest versions of macOS and iOS.  Here’s a link to a how-to on those two tests.

I just ran the MacOS version on a Monterey M1 Mini.  It shows the same pattern as all the non-Speedtest ones.  Slowly rising upload speeds.  This test is more patient than most, so it eventually arrives at a perfectly satisfactory reading.  The thing that’s interesting is the way that it arrives.  For that, we need to return to the RFC.

OK, on to the test.  If you are running Monterey on a Mac, launch the “networkQaulity” command in a terminal session.  Note the capitalized Q in the middle.  Here’s what it looked like when I ran it just now.

I like this test for several reasons.  I like the public methodology of an RFC.  I like that the test defaults to doing the upload and download tests at the same time, to better saturate the network.  And I like the results.  I’m about ready to chalk this up to differences in testing methods.