a pretty good exposition about why most of us did all that work – it was fun, we made lots of good friends and we kinda took care of each other.  Jeff Lange did a lot of the graphics for the first-generation newsletters including everything on this page (i think). 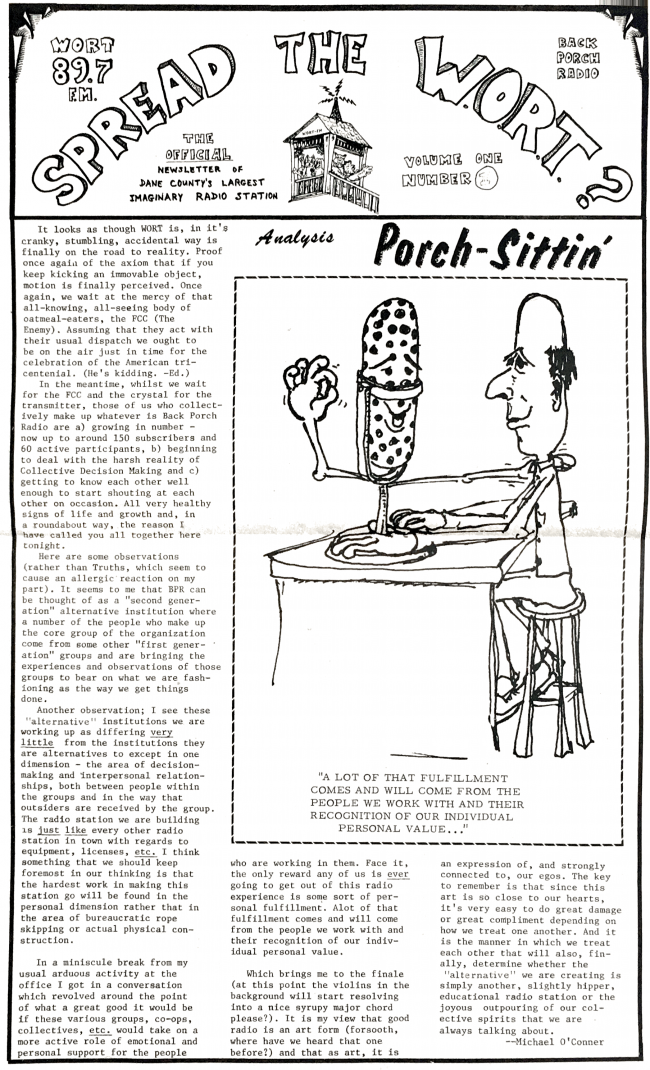 this next one is the one that you can hold in your head when you wonder what it felt like when we actually finally made it on the air.  sooo many people worked sooo hard to get to that point.  i hope WORT is always a focal point for this much effort and fun and friendship.  i love Jeff Lange’s piece about consensus decision-making down there below the fold. 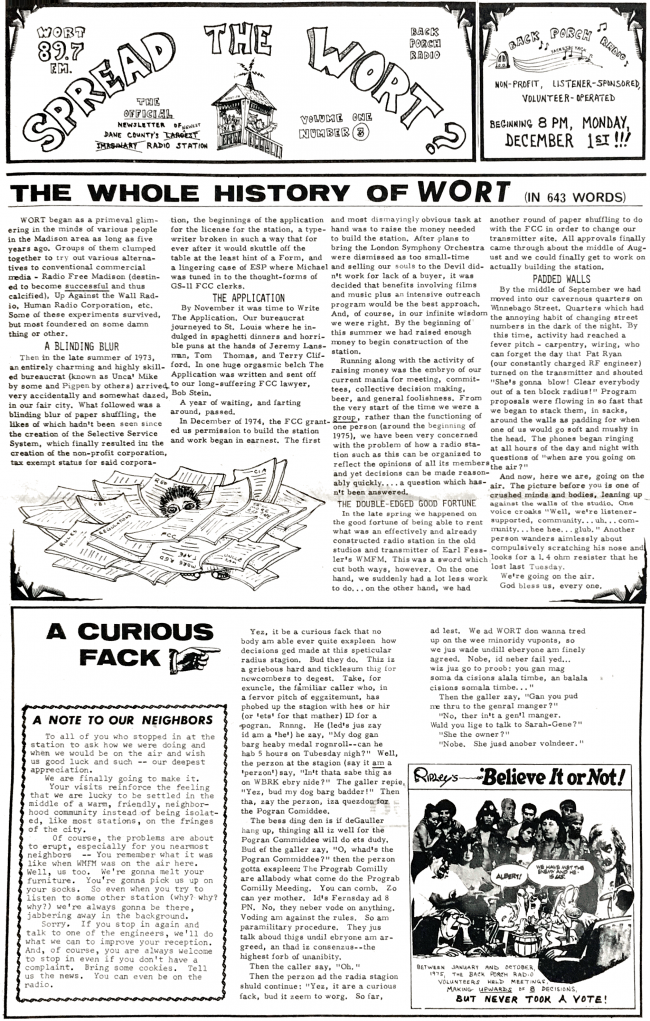 we used those early editions of the newsletter to lay out our thoughts about how we hoped things would go.  here’s Don Alan laying out the early view of programming — Don focused on the news and public-affairs programming while Jerry Zeiger championed the music programming.  who knew that record companies would give you records if you said you were an imaginary radio station! 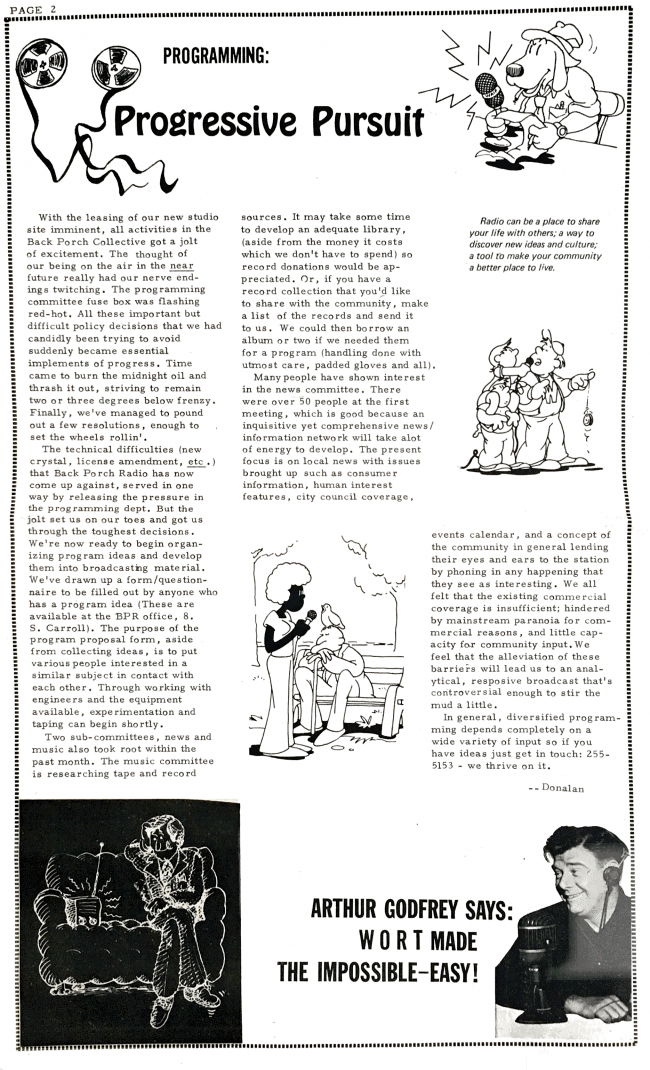 Jeff Lange describing the lucky-accident journey to the initial studio on Willie street…  along with the 3425th teaser for going on the air. 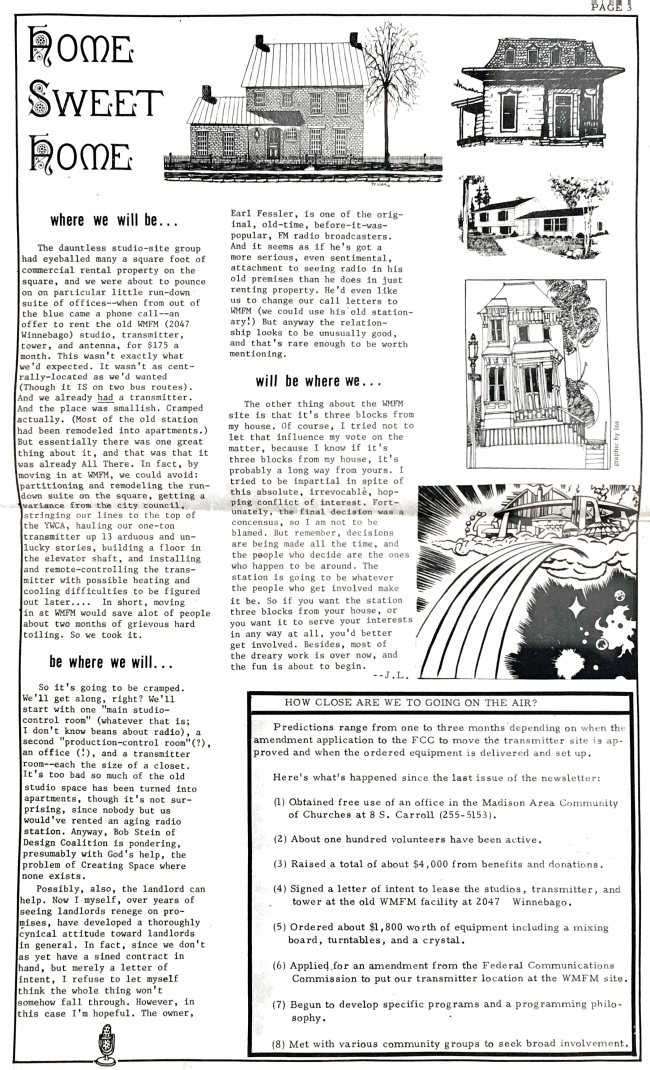 John Ohliger got his start at Pacifica, which was an earlier and parallel path toward community radio.  rest easy, friend.  here we are describing the two precedents we knew – John grew up in the Pacifica stations, i bubbled away about the KRAB Nebula.

see further down for some pictures of the NARK (National Alternative Radio Konvention) which Lorenzo inspired, Bill Thomas organized and we hosted.  that was the first time that people from all the parallel threads actually met each other face-to-face. 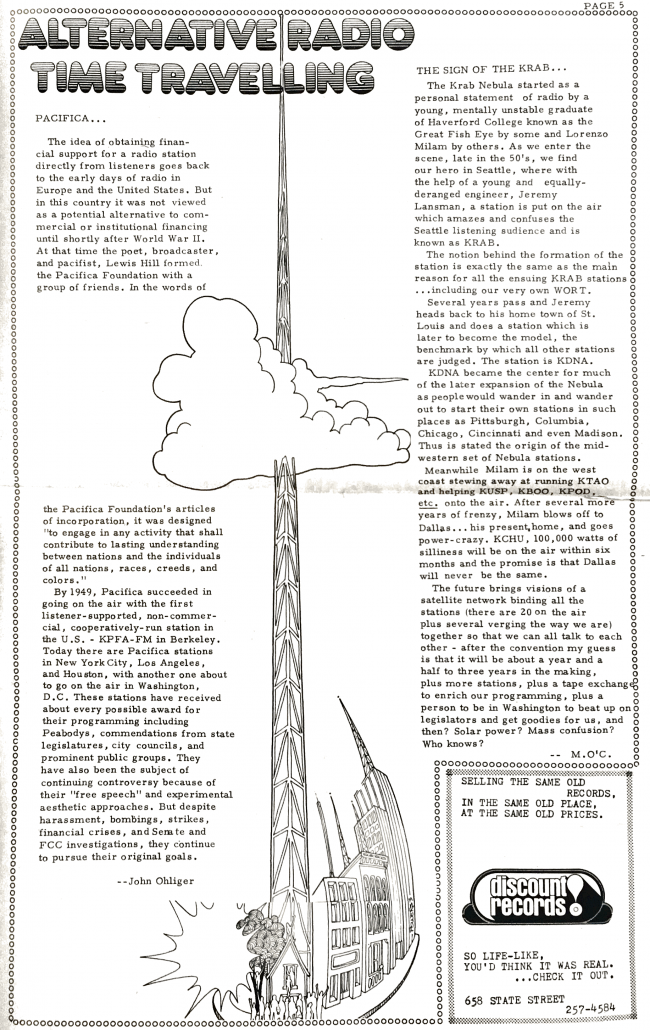 the first Program Guide!!  i love looking through this as a way to remember people and programs.  a pretty darn nifty thing — and the culmination of a LOT of work by a LOT of people. 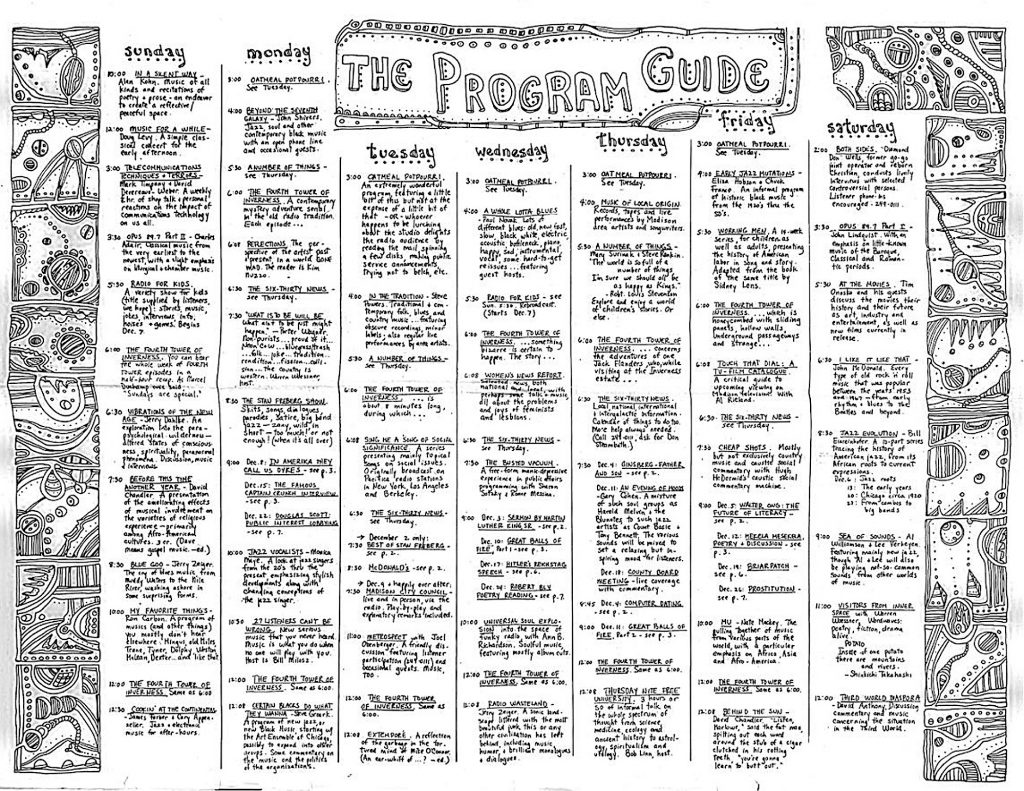 having no good sense, i “volunteered” the WORT volunteers to host the NARK (National Alternative Radio Konvention) while we were waiting around for the construction-permit to get approved by the FCC.   here’s the beginning of the call to arms that Lorenzo wrote to call us together.  i read the whole thing out loud the day i found out that he’d died because it perfectly captured his vision for community radio.  you can listen to that recording here. 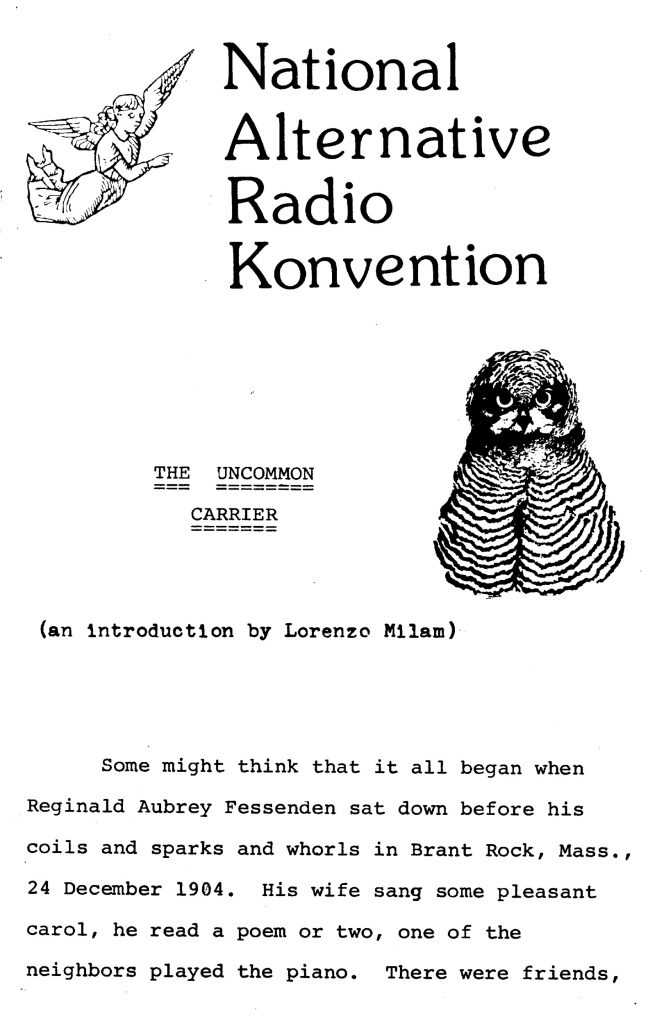 here are a few pictures.  supurb organizer that i am, i’d forgotten about a few things.  like… housing?  food?  chairs for people to sit on at Freedom House?  heck, it turned out OK anyway — because we were sooo desparate to TALK to each other.

here’s the main scene, all spread out in little groups at Freedom House on Willie Street.  today we’d call these “breakout groups” i guess. 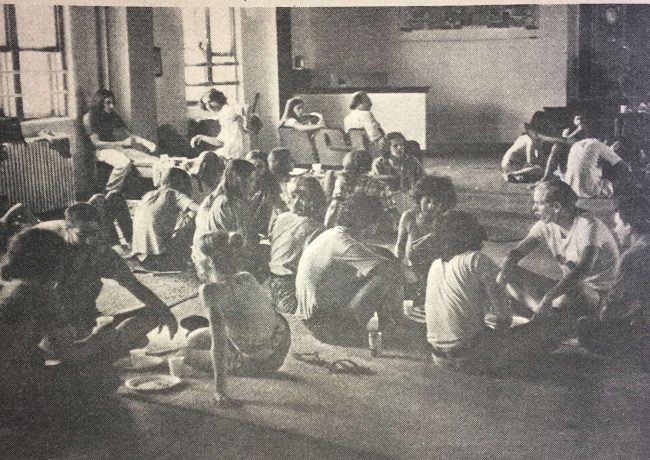 this was a session i missed – i think i was working on food…  people look cranky and hungry.  Lorenzo is standing in the right side of the doorway (the tall fella). 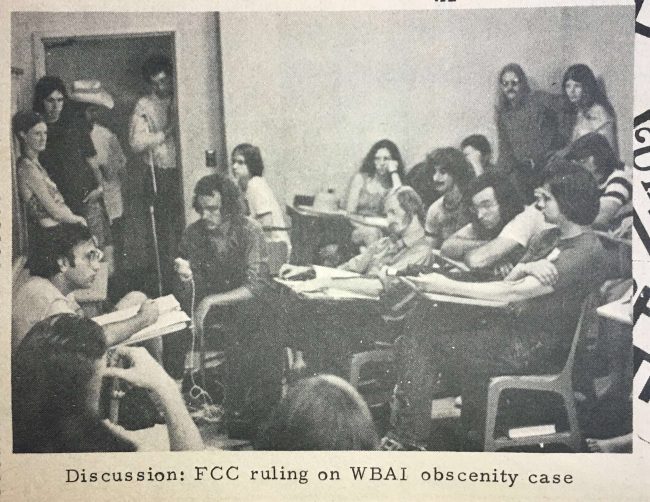 here are people-photos from my scrapbook.   here’s Vinnie Curren, who became Chief Engineer some time after i left, in his native lair. 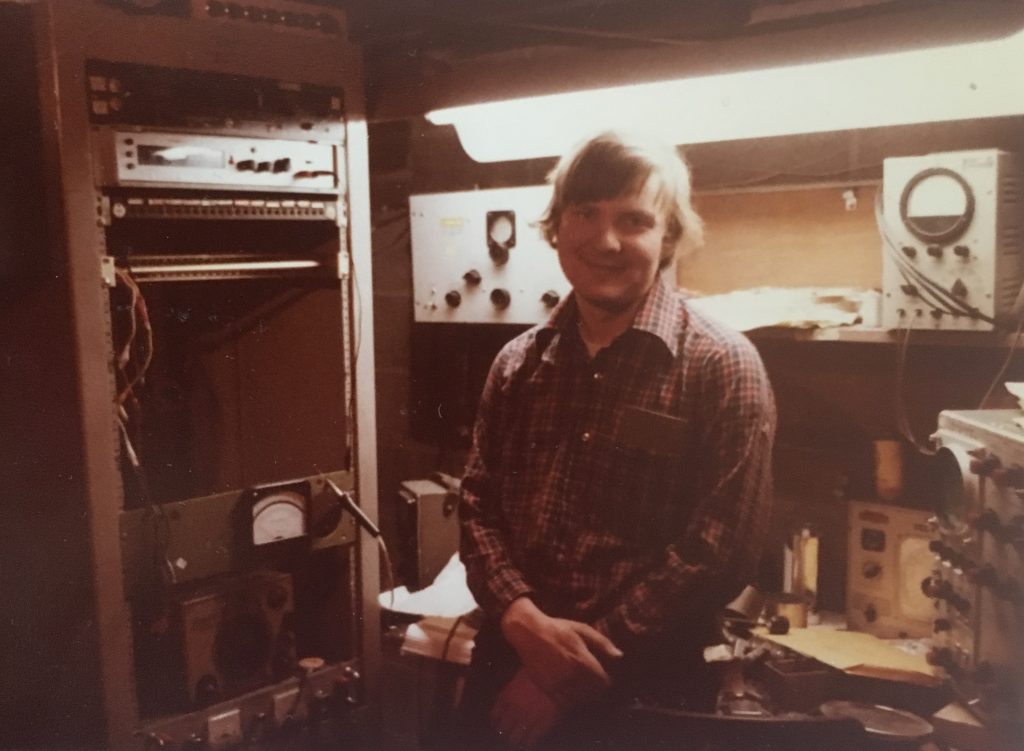 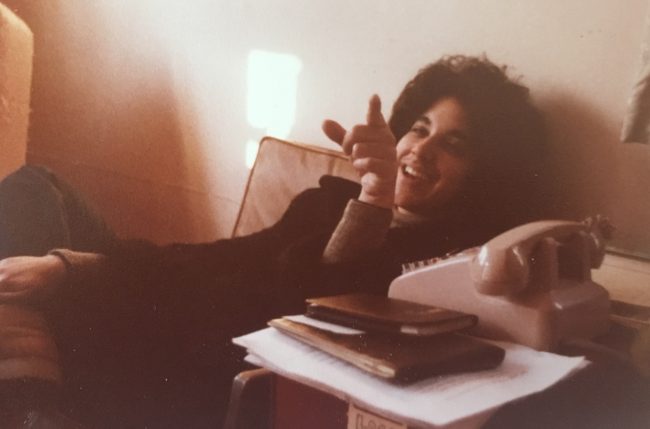 a nice shot of the original mixing board, record library and interview desk just peeking up above the tray for announcements and PSAs.  that’s pretty close to the original configuration and right where i sat when i lied my ass off to Pat Ryan about how much distortion the transmitter was producing when we did the certification-tests for the FCC. 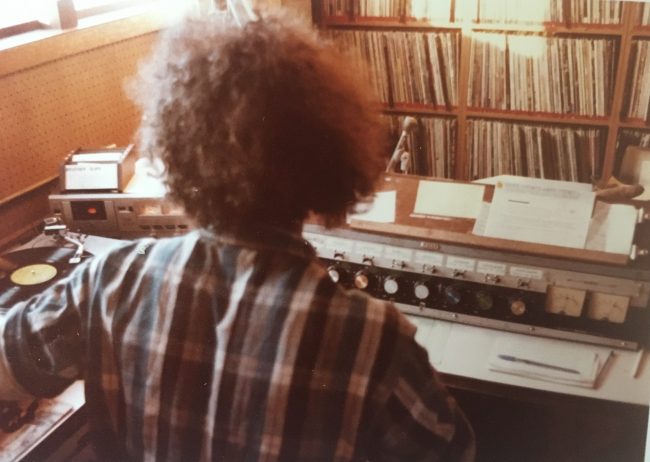 turning around, here’s the original pile of equipment.  this is the stuff that all failed, one piece of gear after the other, on that first night.  i wondered for years where my old Teac tape recorder had gotten off to.  there it is, peeking out from the back row on the right. 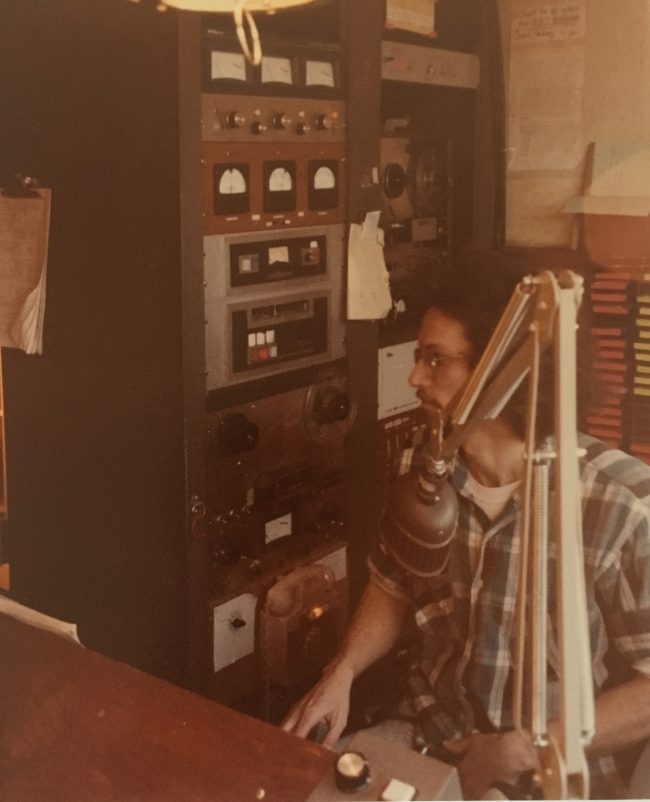 that’s the story of the station going on the air.  i stuck around for another couple years and eventually wandered off to other things.  i’ve since discovered that i like starting things up, but don’t do particularly well at keeping them going.  WORT was fortunate in that i left before causing too much damage.

i still have the Resolution of Thanks from the City Council… 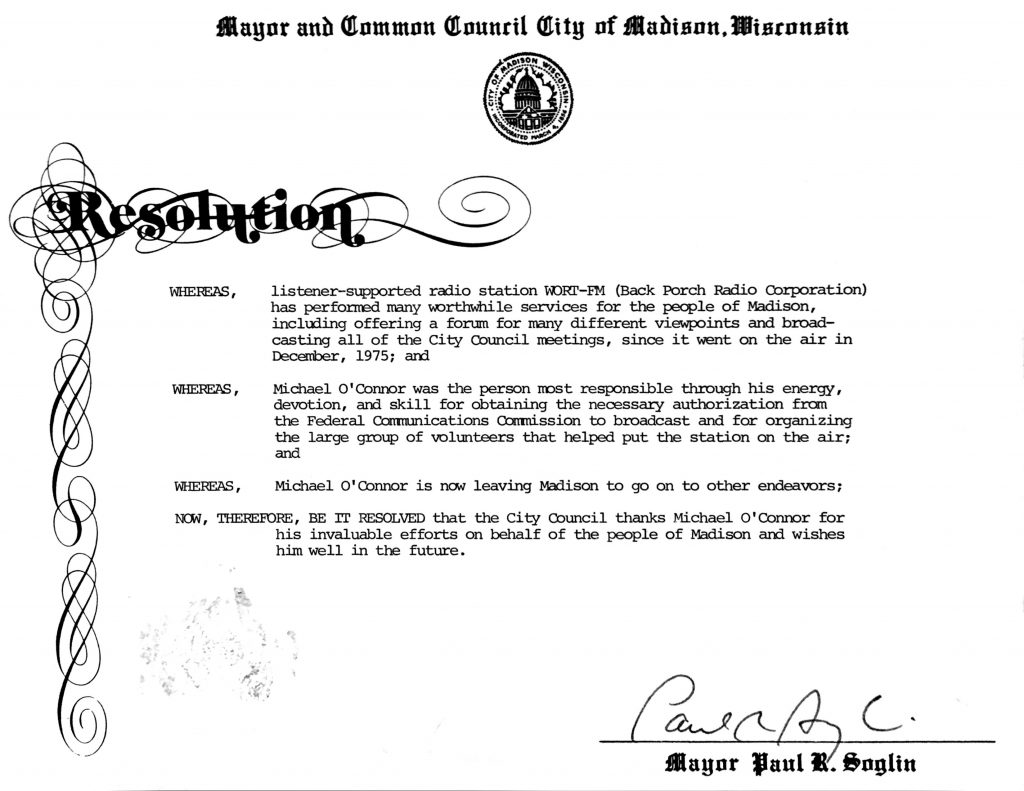 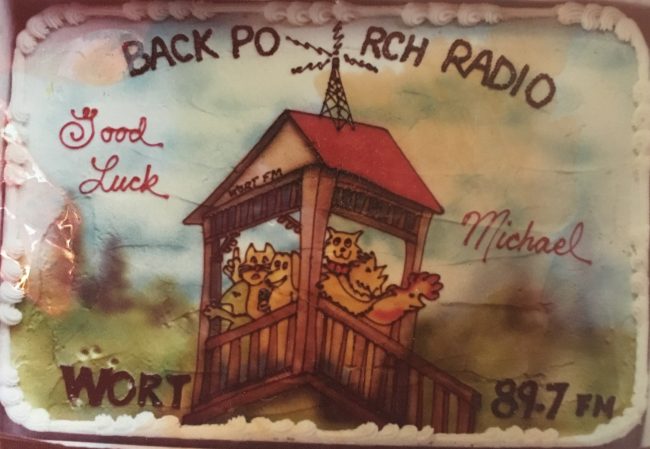 here are John Ohliger and me hamming it up — John organized all this farewell foolishness that meant (and means) so much to me. 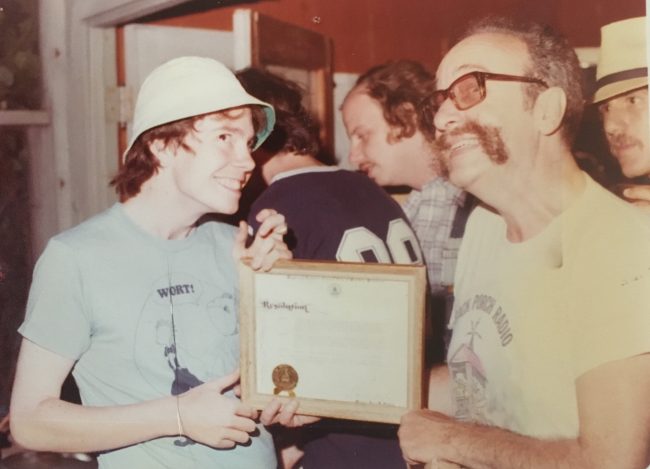 here are the folks who carried WORT on to the next stage.  see those wooden letters on the wall?  one of Jeff Lange’s many creative contributions — those letters spelled WMFM when he started out.  a day or two later, after some pretty darn creative work with a Skil saw, the letters returned to that wall…  transmogrified. 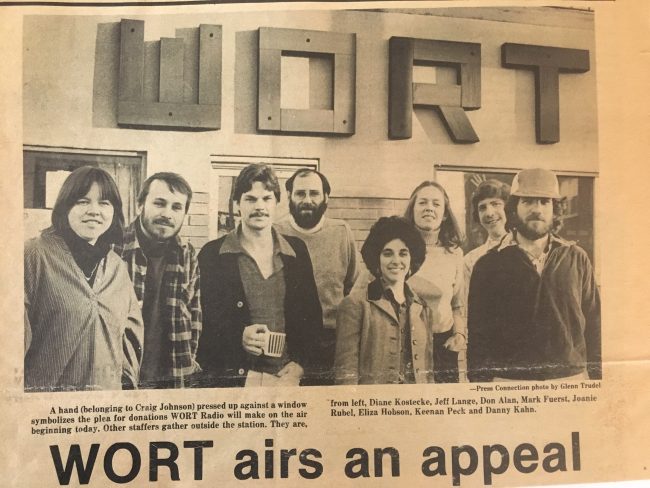 that concludes my report.