Here’s a series of photos of my music workstation evolving into my music studio over the years. Click on the photos for ginormous versions. 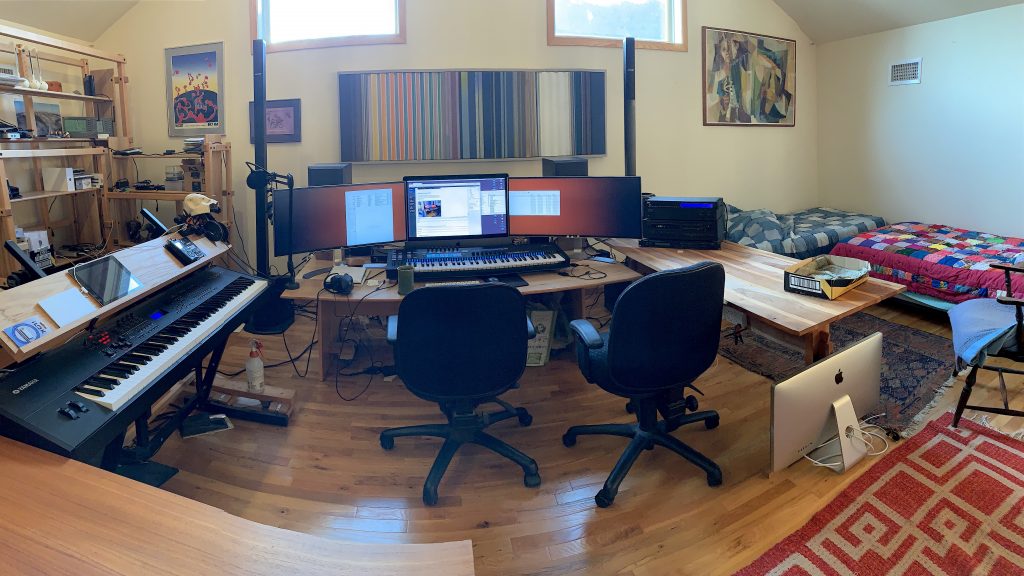 This is a chronicle of the music workstation.  It begins with a picture in 2005 and continues up to…  who knows when?

I started podcasting with a site titled Sex and Podcasting, which was a blatant lift from Lorenzo Milam’s Sex and Broadcasting (seen, just peeking into the far-left corner of the picture, right where Lorenzo would have wanted it).  My idea was to explore how my experiences with community radio might map over into this new “podcasting” thing.  Imagine my surprise when the attention-getting “Sex” in the title catapulted me into the Top-100 podcasts ranking for a time.  Marcie just came across this photo (in early 2022). 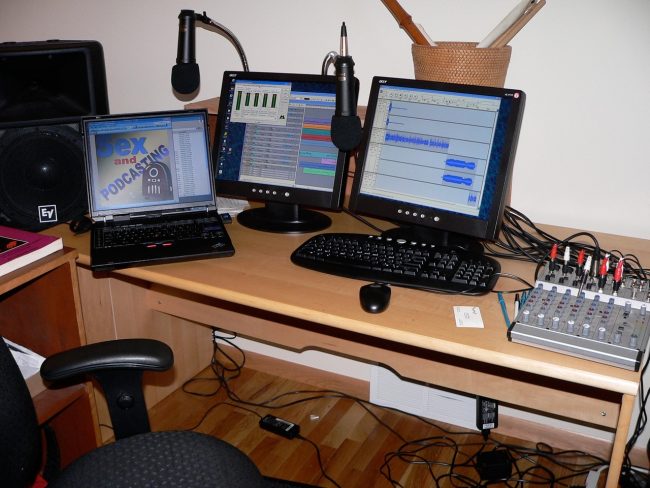 Six years later, podcasting had faded into the background (although Geezercast, my sequel to Sex and Podcasting ain’t dead yet, it’s just sleeping) and I was on the upward slope of keyboards and midi gizmos… 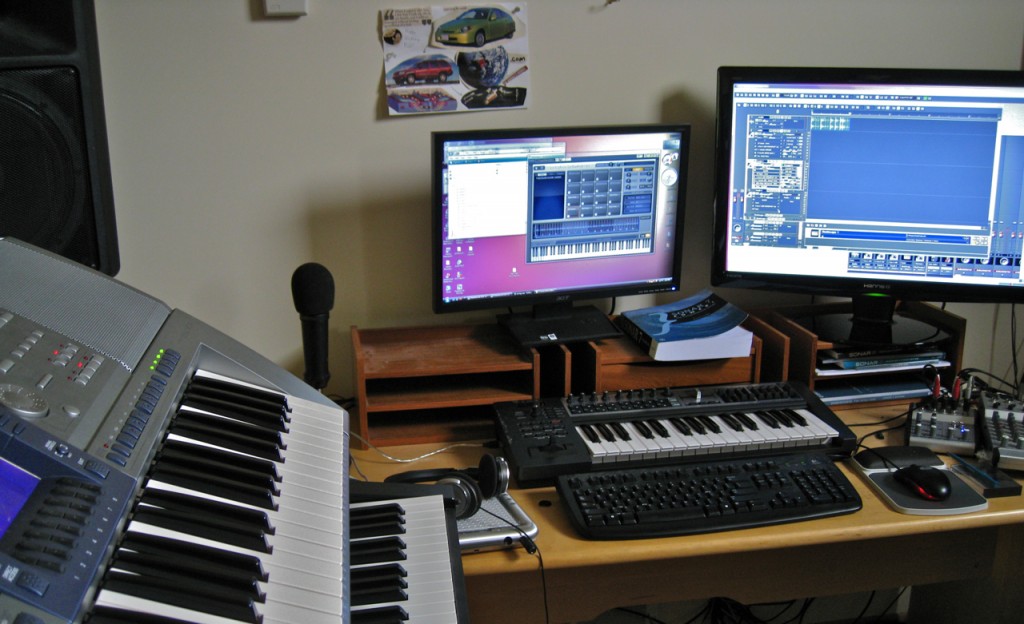 Edirol PCR-300 (the little one — super handy for composition)

Tenori-On — a gizmo I’m still trying to figure out 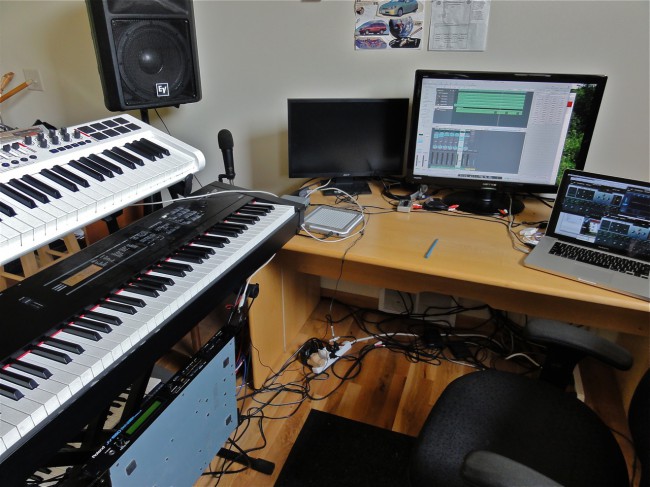 My goodness what a difference a year makes.  Here’s the current state of affairs.  I finally switched back to the Mac for music-making after a long time away.  I gave up on the PC — the platform was just too unstable.  Yes, I changed everything (hardware, software, peripherals, cables) trying to diagnose the repeated-crashing/freezing problems.  Don’t want to go there.  The Mac “just works” and it’s on a laptop so I can haul it around with me.  I’m now enjoying a much higher ratio of “making music” to “fixing the setup” time. 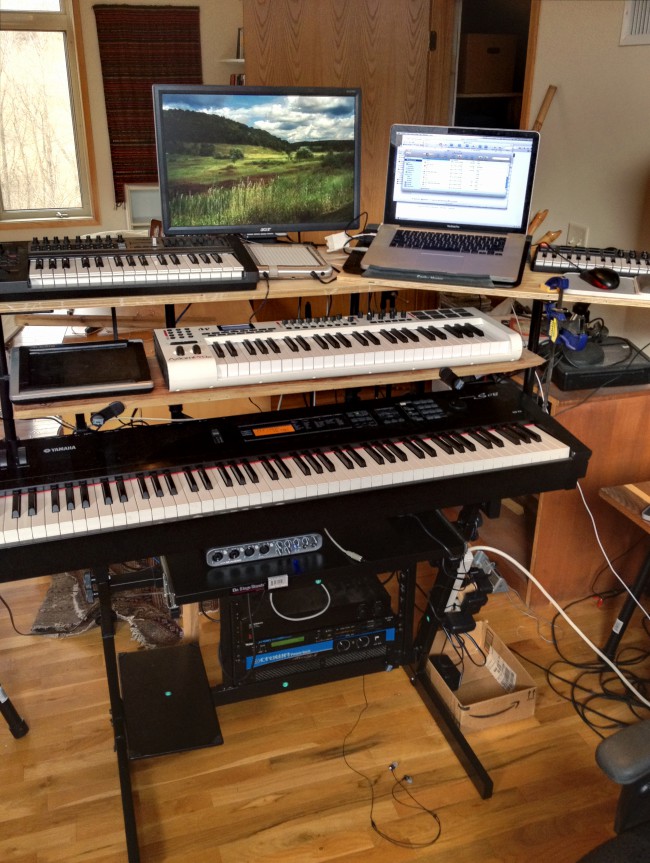 The big change is the arrival of an OnStage Stands WS8700 that holds all this stuff up.  I’m still ironing out the kinks, but I really like having all the stuff in one place.  The computer “commutes” from my desk (where all of the “office type stuff” like printers, back up drives, and so forth are plugged into a USB hub) over to this pile o’wires where all the music peripherals are hooked together in a USB hub.  It takes about a minute to move the laptop and I’m all set.

The trouble with this layout is that it doesn’t go on the road — it takes about 4 hours to set it up.  So I’m going to have to come up with a thinner version for gigs, but it’s great for working at home. 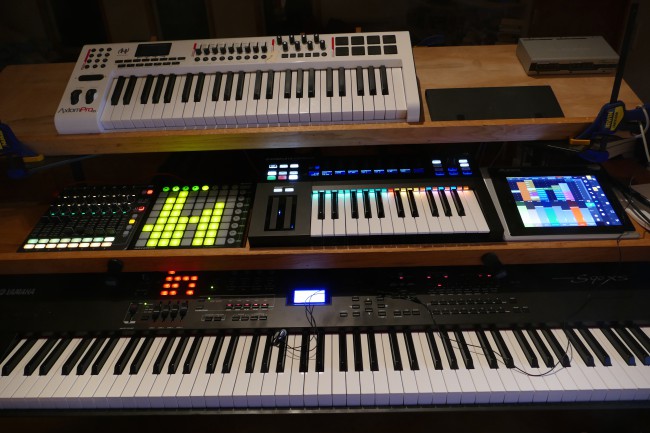 It’s been some time since I updated this picture and lots of things have changed.  The biggest is a switch from Logic Pro to Live as the workstation software of choice.   The change from “tracks” to “loops” is still working its way through my playing, but the learning is loads of fun even if I never arrive at a place that makes sense.

The instruments have changed accordingly.  Lots more focus on triggering and managing loops has resulted in a lot fewer keyboards and many more buttons and knobs to do the triggering with.  So there’s the standard pairing of a LaunchPad and a LaunchControl, the most-amazing TouchAble app on an old iPad and Native Instruments Komplete Kontrol rounding out the second bank.  The Yamaha S-08 finally got pounded to death and has been replaced with a S90XS as the main keyboard (with all sorts of cool features that I love as a guy that mostly plays live).

I thought the colors in the buttons would drive me nuts, but they turn out to be really handy as my eyesight starts to fade. 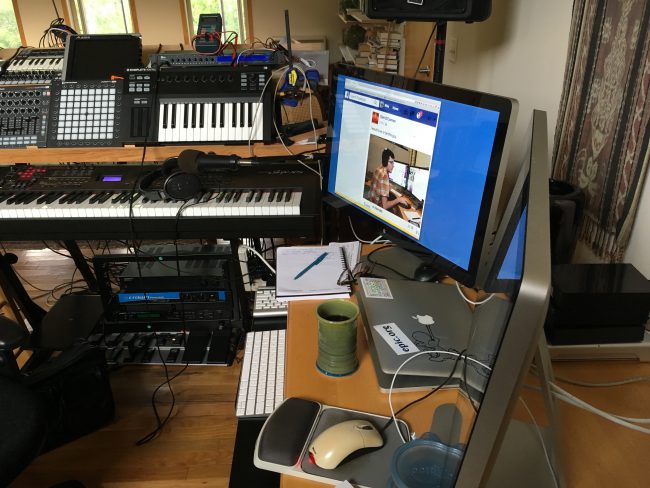 Egad.  The buttons have multiplied.  Perhaps to the point of this really-funny “too many buttons” video on Youtube.  But also note the addition of the Mac Pro tucked behind one of the monitors.  I’ve taken a series of Kadenze classes which have upped my game, but also taken my music to places that overwhelm the laptop.

The “Everything Must Roll” initiative happened over the summer and this is the result.  This is much more a music lab and less a single-purpose workstation.  The bigger keyboards anchor the sides but everything else can move around to suit the project of the moment. 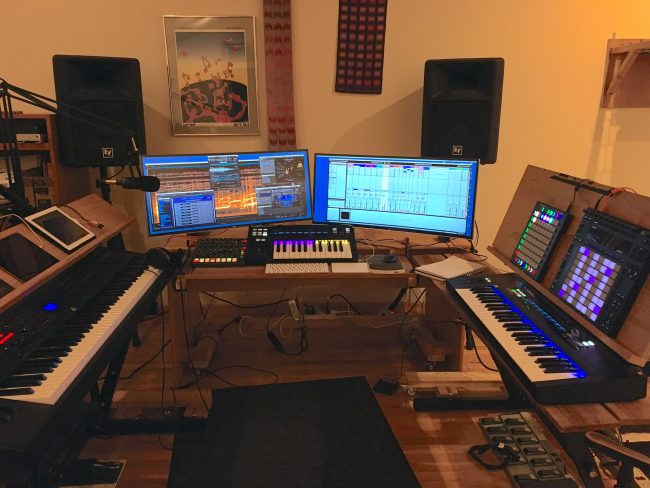 Here’s a “back of the house” photo that shows the curvy screens on mounts that let me move them around depending on where I need them, the way that I separate signal wires (on the upper level in the back) from the power wires (running closer to the floor) and a few of the many clamps that hold today’s configuration together. 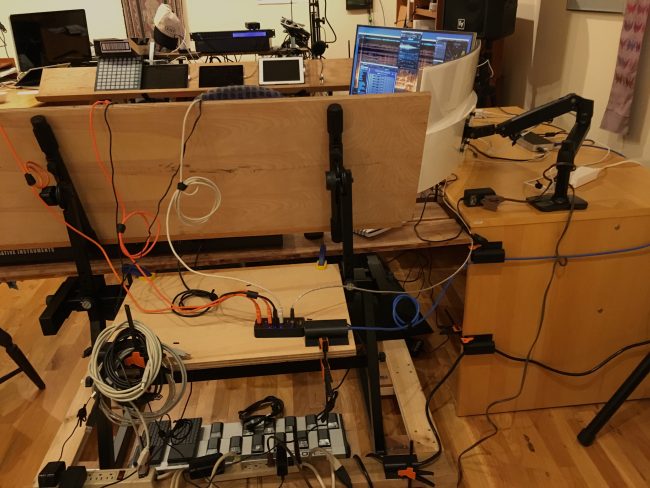 Here’s one that shows the left side back of the house. Computers, UPS, storage and books on the shelf on the lower left. Back side of the audio gear on the upper right. Are you noticing the clamps? They’re handy for cable storage. 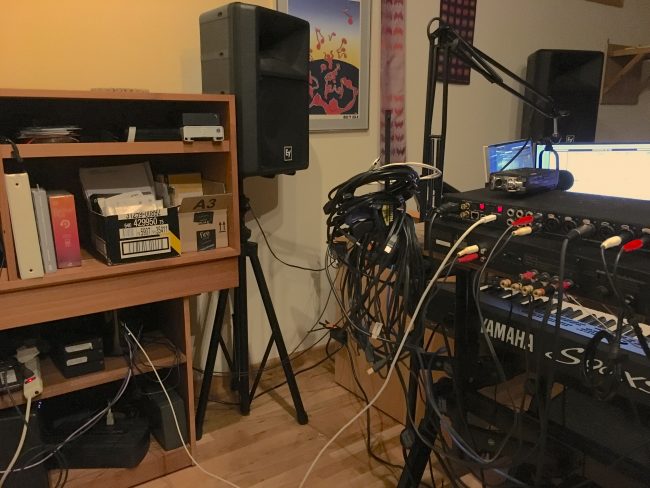 Here’s the front of the audio and tablet side of things.  Really different activities over here than what happens on the “composing” side. 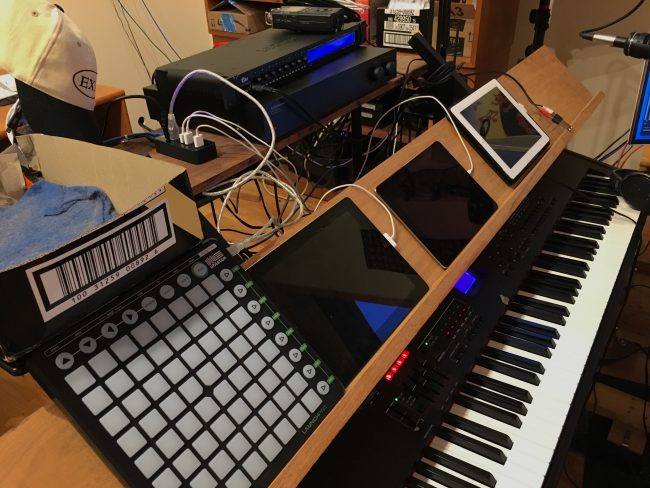 Just a touch.  Working on a movie project so an extra screen joins the pile, just for a couple months.  Mounted on a milk carton (with the standard collection of clamps). 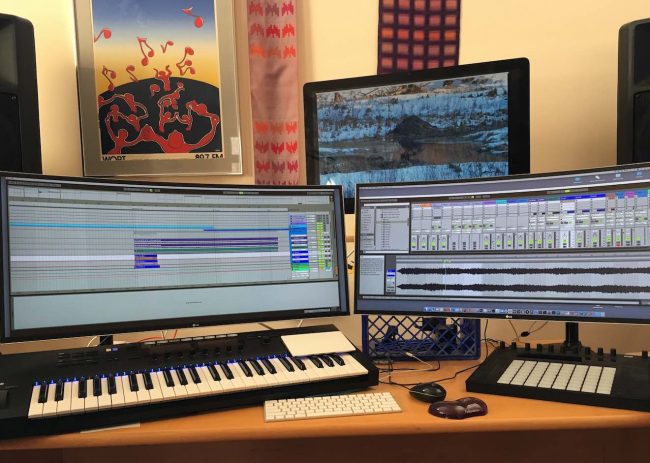 Replaced the Mac Pro with an iMac Pro and added an APC40 MkII to the mix.  The Bose PA mixer sits on the lower left.  The Seasons 2018 mix is on the screen.  The two side wings are evolving too.  The left side is becoming more focused on live jamming with the full keyboard, the right side is moving toward mixing/mastering, with composing in between (this pic). 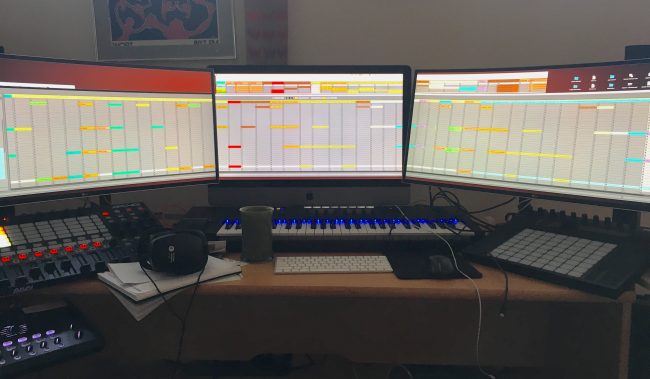 A period of thinning-things-out.  Replaced several devices with a Novation 61SL MkIII keyboard, which gained a lot of space on the desk and more keys on the keyboard.  Currently working on a series of mixes that require a lot of audio processing, which depend on iZotope RX7 and Melodyne additions to the standard Ableton Live devices. 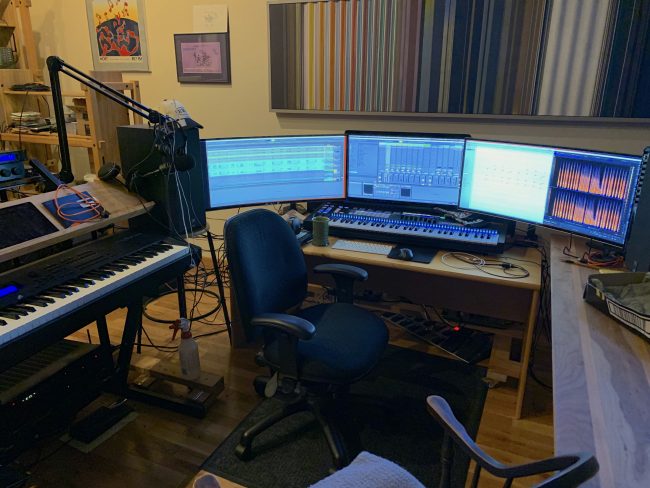 More thinning and a new emphasis on monitors (speakers) for doing mixing.  Stumpy’s Dining Room Table got replaced this year – the original tabletop wound up here.  That in turn lead to a roomier layout all ’round — two people can work side by side and listen to the results of their choices now.  The third tier of the OnStage WS8700 stand was retired — too wobbly, too far away for sitting-down access.  “Lab bench” on the right is a very early trestle table woodworking project.

Ah, the Covid years…  This is a picture of an early version of a mixer for larger online-music performances based on Jacktrip software.  This has been a marvelous journey into Linux, remote servers, shell-scripting, mixing and more. 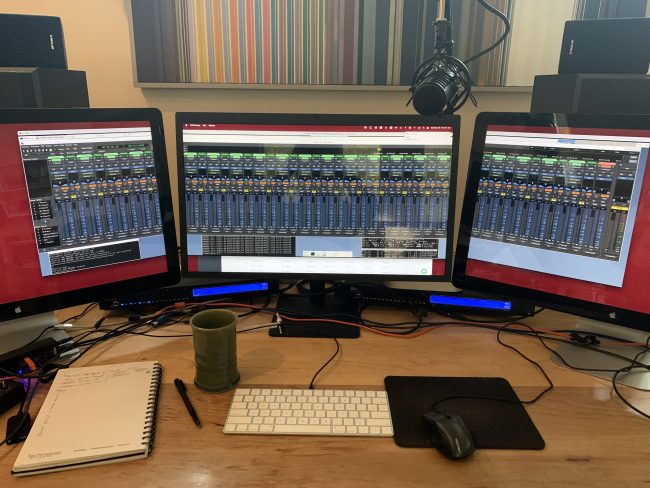 Here’s a link to a post about one of the big puzzlers I encountered along the way.  Scaling Jack (and Jacktrip) by using section-routing.

Back of the house right at the end of the reign of the 2nd Mac Pro.  I’ve had mediocre results with both of the ones I’ve had.  It’s still here but I’m looking forward to the arrival of a Mac Studio in a month or so.  This is a good demonstration of the “Nothing Against the Wall” rule that I’ve incorporated into the design. 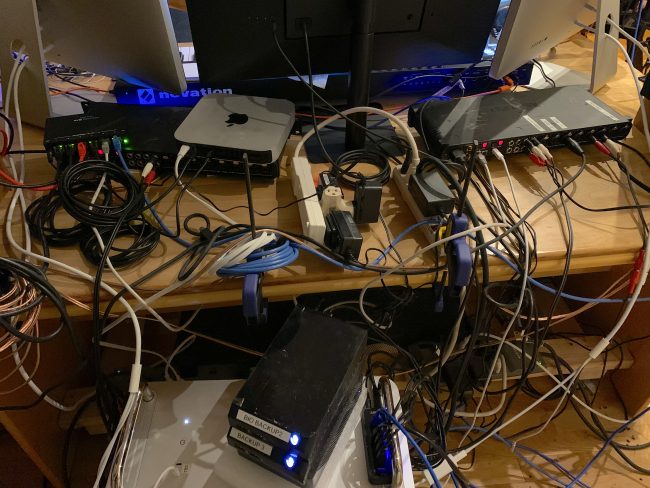