We bought Jon Seltzer’s old (early ’60’s) boat and beat the crap out of it up on the St Croix river when we had the cabin.  It wound up spending 10 years in the garage, gently guilt-tripping me and asking to be restored.  I finally realized that I a) didn’t have the time and b) didn’t have the skills to fix it up and we teamed up with Jim at Imperial Boat Repair to get the job done right.

Several things are going on here.  We married the old 40 hp Yamaha that used to push our pontoon boat with the Whaler this time around.  I decided that meant we needed a new transom, partly because I was worried that the old ’60’s transom would just fall off the boat with the bigger motor and partly because this is a long-shaft motor and the transom needed to be higher in order for things to work right.

All of the interior wood was shot, so I ran off to Teh Internets and bought new wood that Jim installed (abandoning my long-procrastinated original plan of refinishing the old wood).

Then there was the job of Getting The Goo Off The Boat.  You can see from the “before” pictures that I took a half-hearted run at washing that stuff off in a few places, but none of the stuff I used really worked worth a darn.  Jim and his gang acid-washed the boat and presto! it’s nifty.

Meanwhile the motor went off to Jim’s favorite mechanic (pictured below) and got the once-over, since it hadn’t been run in 10 years and wasn’t put away very carefully.  Then Jim and the gang rerigged all the wiring and controls, threw in a bilge pump and a depth-sounder, rewired/repaired the trailer and today Marcie and I dropped by to pick it up.  These pictures tell the story.

Pretty nifty huh??  I think we’ll wait ’til Monday to put it in the Mississippi (down by Alma, Wi) to avoid the weekend-boater crazies.  Then we’ll see how fast an old 13 foot Boston Whaler goes with a 40 on it.  I’m sure it’ll be fast enough for me.  I’ll add an update and some more pictures after the maiden voyage. 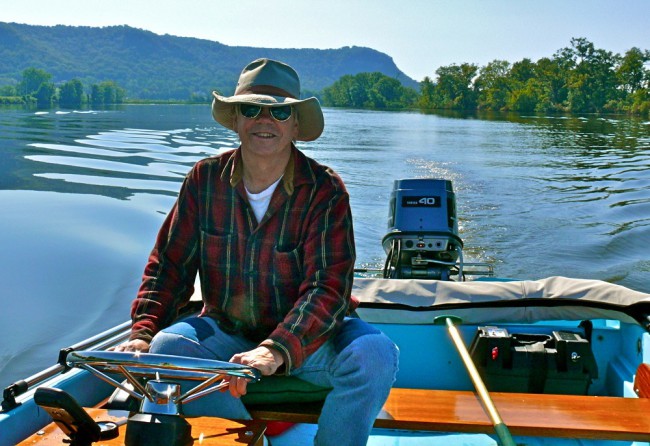