This is a series of pictures of our dining-room table.  The cool thing about it is how it folds out — so most of the time it’s a modest little table that four people can sit around.  But folded out, we’ve crammed twelve people around it.  Also great for poker.  This series of pictures shows how it’s put together. 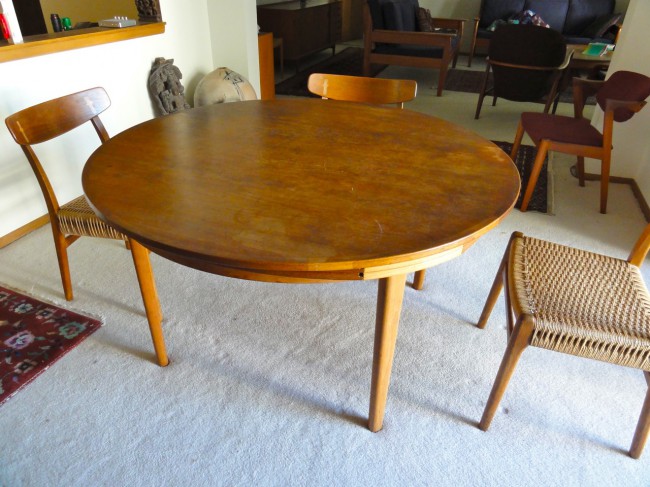 This is how it looks half way in between — the four extensions have been pulled out. 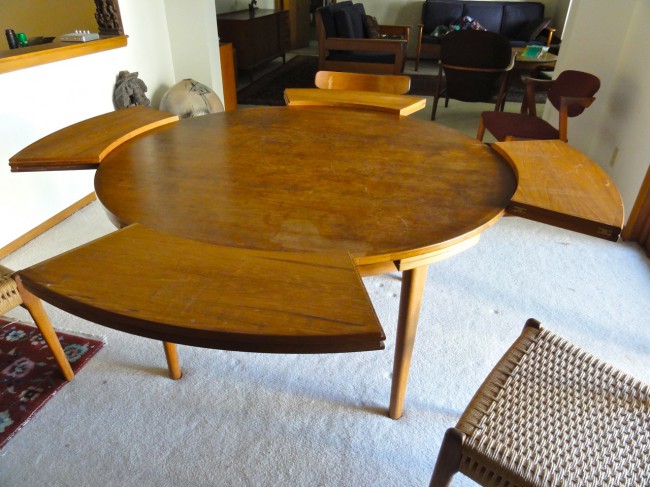 Here’s the “large” configuration.  Eight people sit in style, a little squishing and you can get twelve around it. 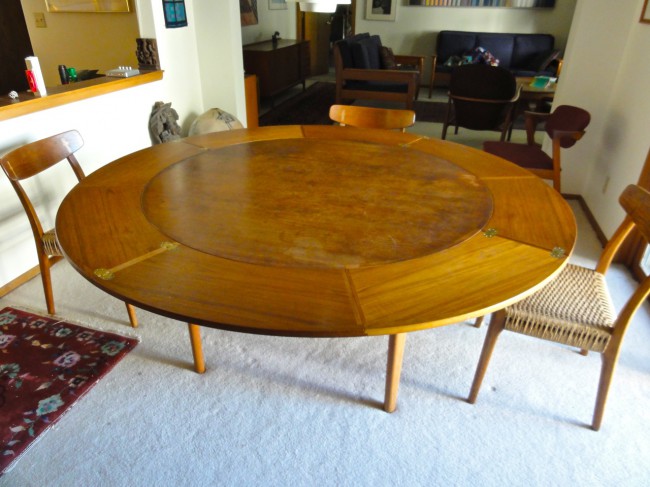 OK, so how does it work?  Here’s a picture of the halfway-out view, with the center surface removed so you can see all the wiring. 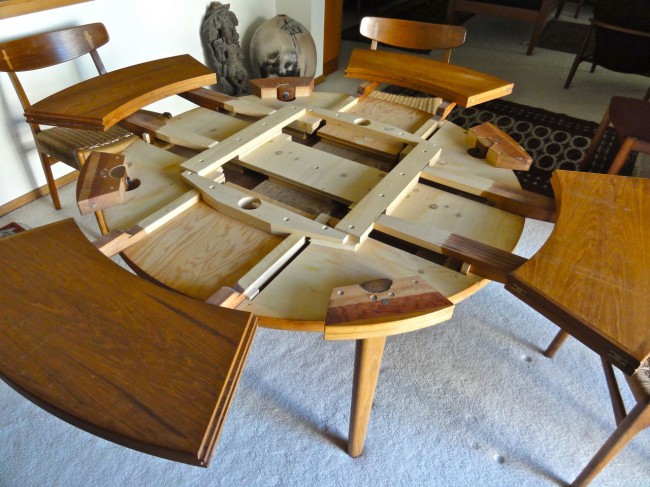 A closer look at the inner workings, this time with the extensions pushed back into the “small” configuration. 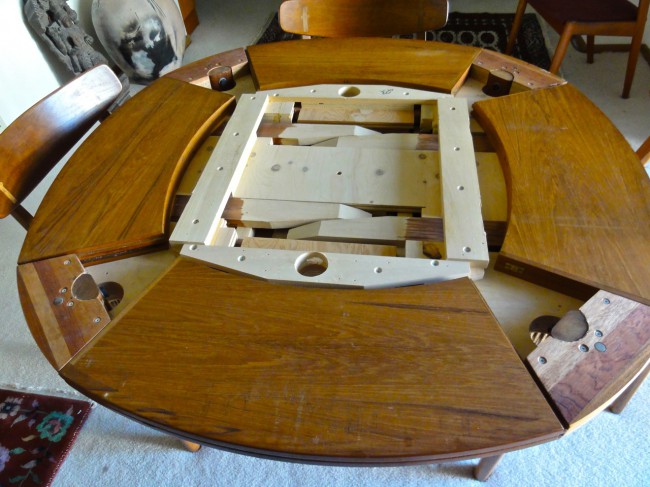 Even closer.  There’s some pretty amazing geometry in there. 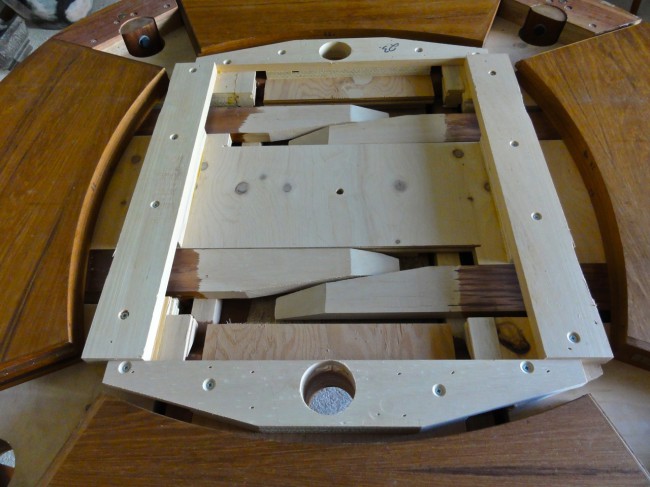 Here’s one extension pulled out — to show the relationship between pushed-in and pulled out inner workings.  As extensions come out, they also need to rise vertically so that they’re bringing that foldout piece of the table up into the same plane as the center part. 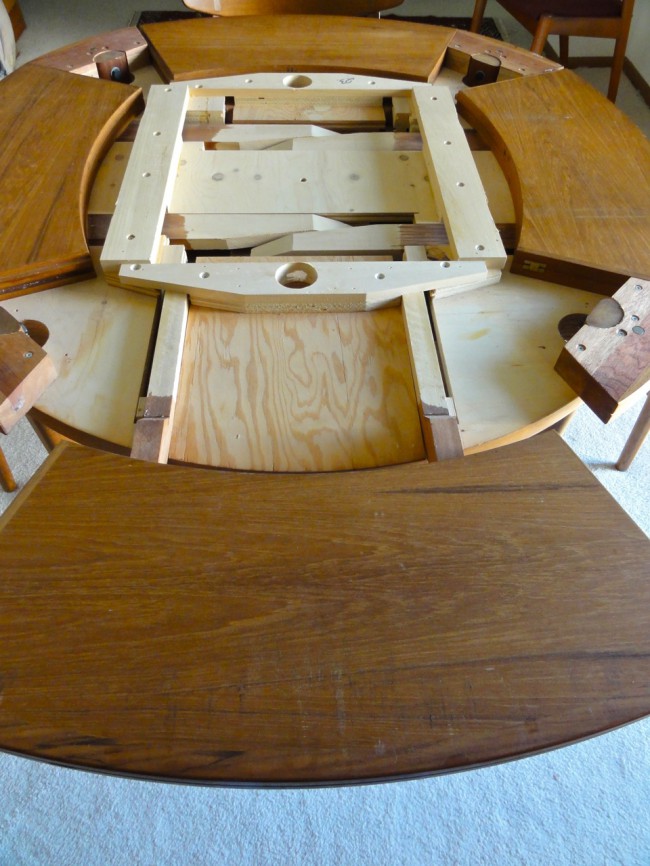 Another view — showing how the “east west” extensions are different than the “north south” ones. 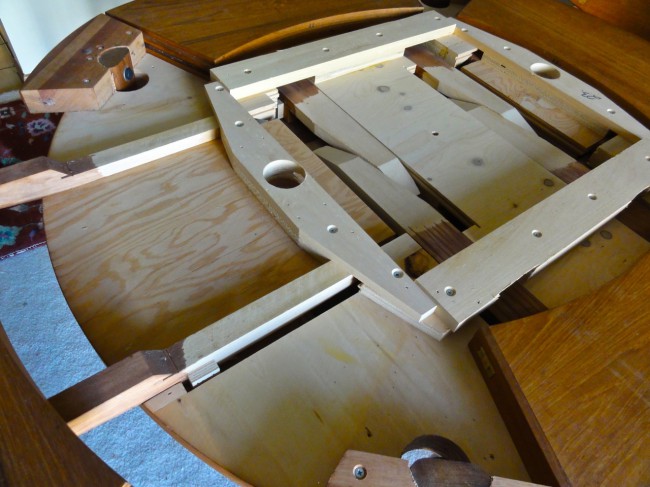 Here’s one extension pulled all the way out of its little track — see the shape under there, that’s the trick to the “rise vertically” solution. 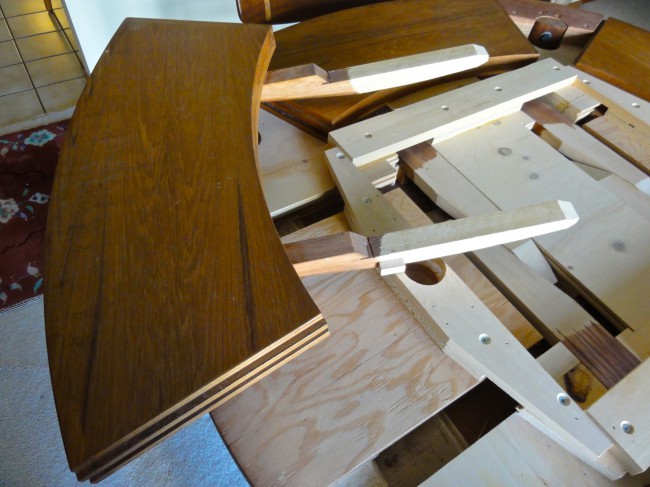 Close in view of the complex shape of the extension-support — the geometry is different on all four of these in order for them to fit together when the table is closed. 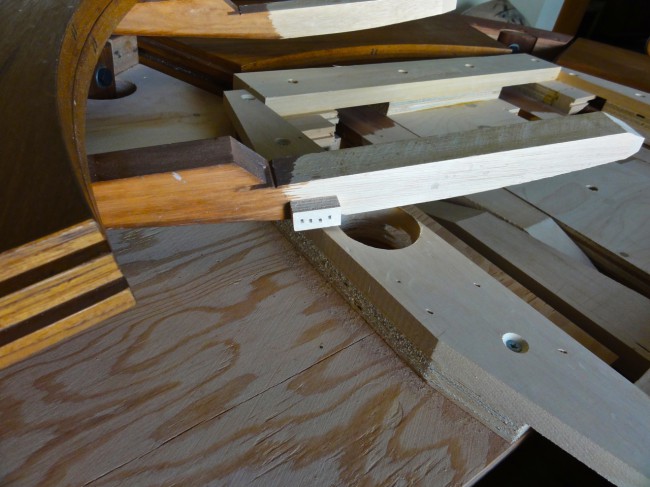 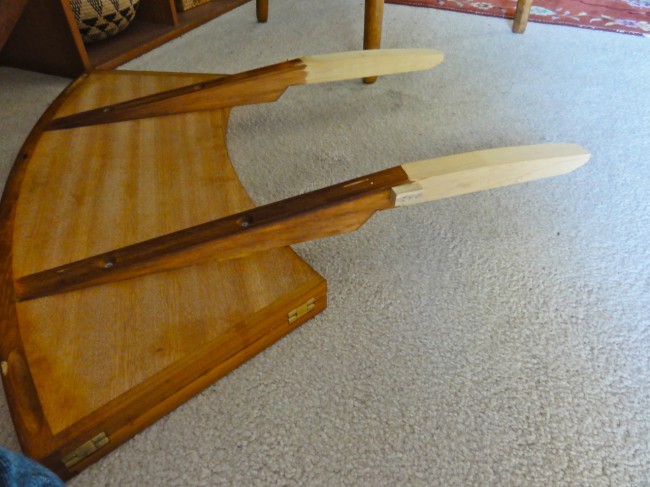 Here’s the trough that the extension rides in — more rise-vertically geometry. 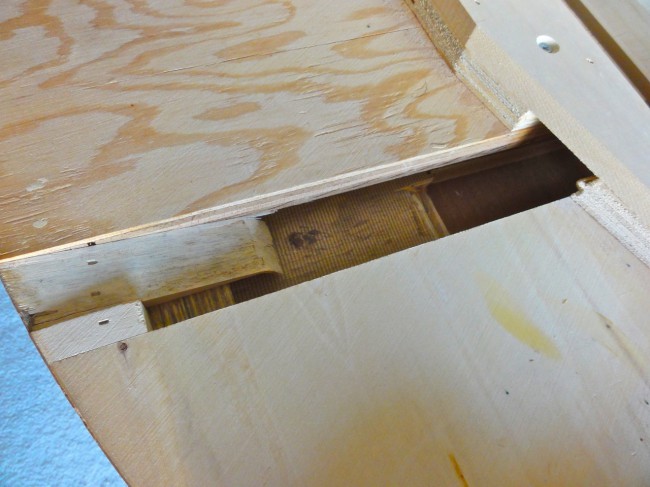 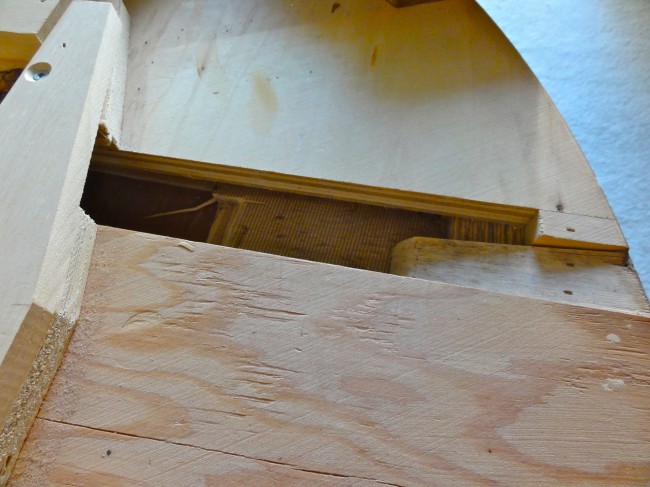 Now all the extensions are extended. 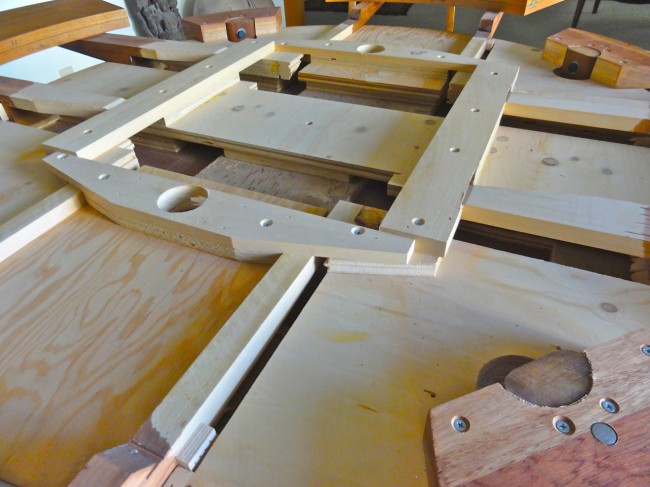 Leg detail.  About the least complicated part, but look at those matching inner and outer curves.  Sheesh, it would take me years to get that right. 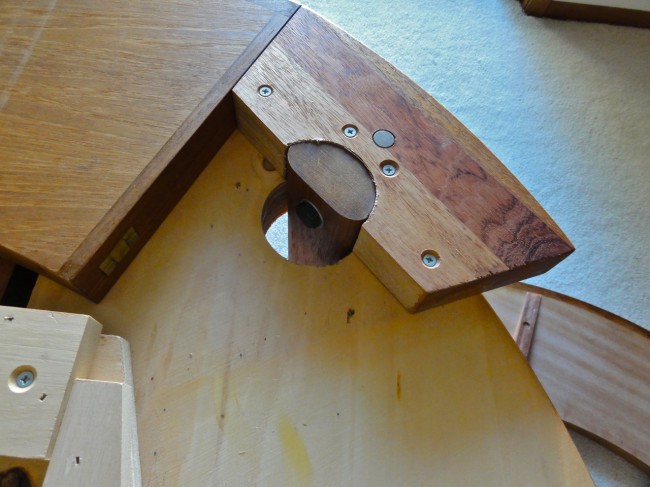 Here’s a detail of the hinge on the extension. 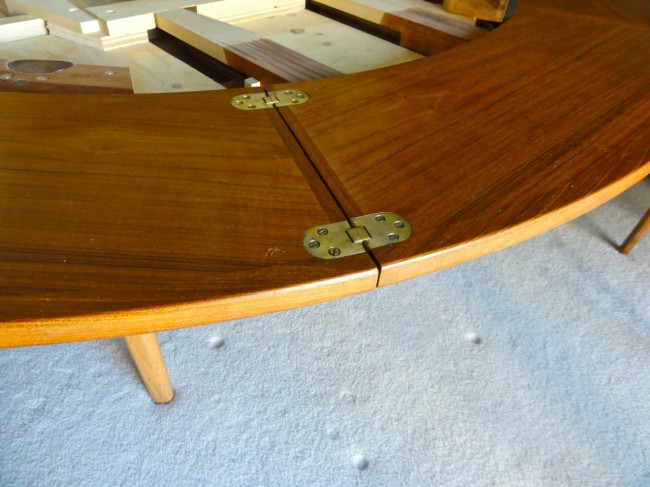 And here’s a shot of how the “flopping down” end of the extension mates with its neighbor. 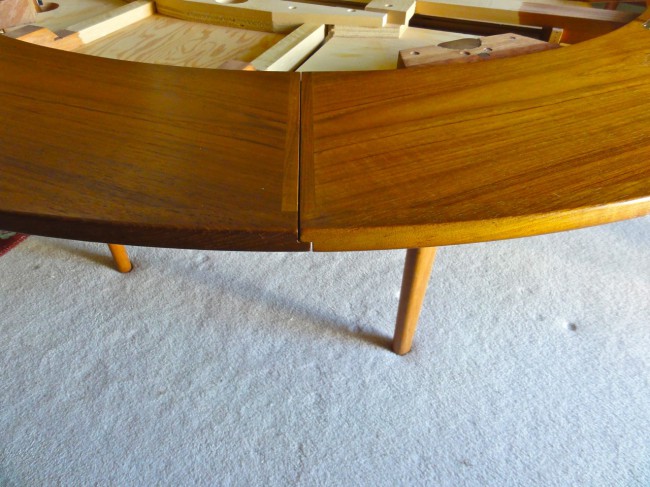 The bottom of the top — showing the two big pegs that align it properly. 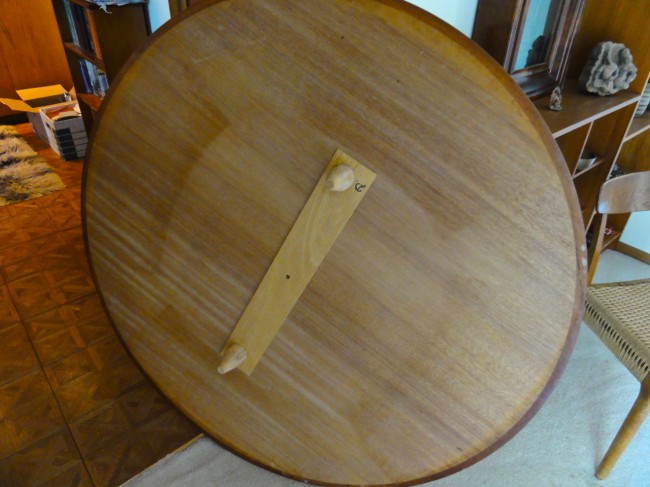 Detail of the pegs. 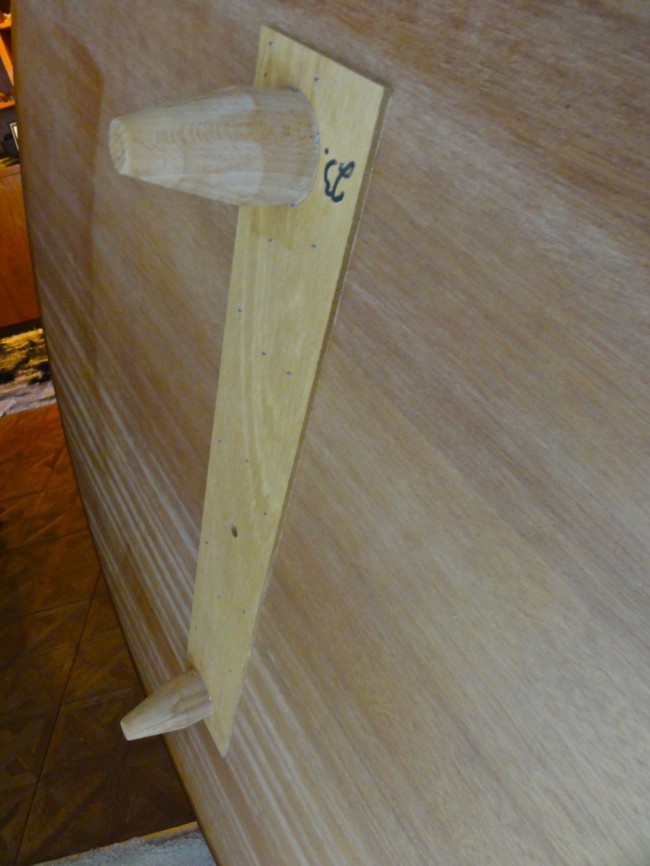