Back in late 2011 I wrote this scratchpad post to document my efforts to move from Snow Leopard Server to Lion Server.  I ran into some configuration problems that stumped the 2nd-level folks at Apple and eventually I abandoned the project and stayed on Snow Leopard.

When Mountain Lion came out, and went through an update or two to iron the kinks out, I decided to have another go at it.  I’m crossing my fingers here, but I’ve been on OSX Server (the new/old name under Mountain Lion) for about a month now and things look pretty stable.  So here’s another scratchpad post to document what I did to put back a few things that were removed from the standard OSX Server environment.

I found that the standard 4gByte memory that shipped with my server started to get very tight as I started turning on the various Python based services (Calendar, Contacts, Wiki, etc.).  In fact, by the time I had all those services running, the machine would lock up and crash after being unreachable for a while.  I upgraded the memory to 16 gBytes (not officially supported).  Looking at this memory-use graph out of Server, you can see why the server was having trouble with 4 gBytes but it looks like 8 gBytes would work OK as well. 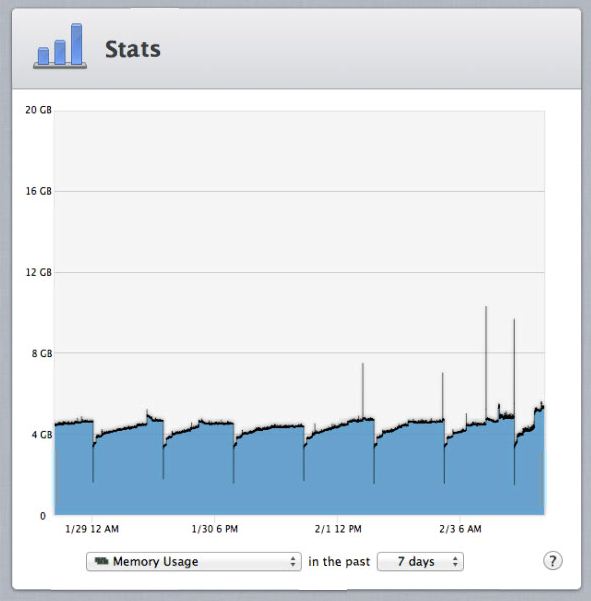 I know, real men are supposed to run their servers for decades without restarting them.  But I’ve found that having the server reboot itself every night in the wee hours of the morning clears out a lot of memory-leak cruft and, combined with the added memory, has made the machine quite stable.  System Preferences/Energy Saver/Schedule is the place to do that.

I hardly ever use it, but the idea of a completely-under-my-control VPN appeals to my tin-foil-hat privacy side.  Setting it up is a little tricky and I found this guide to setting up VPN on a Mac Mini server that’s running Mountain Lion to be really helpful.  I stepped through the process exactly as they described it and it worked.  I love that.

Replace features that were removed

The nifty firewall in Snow Leopard (IPFW) was replaced with the newer packet filter (PF) firewall in Mountain Lion.  And all of the firewall-management features were removed from Server Manager.  Most likely because the presumption is that these servers are running on a network that is already behind a firewall — and because these rascals are tricky and hard for Apple to support.  But I needed to run the PF firewall on this machine.  Doing that by hand is Too Hard, so here’s what I did.

Apple dropped MySQL from their distribution (licensing issues would be my guess).  But all of the family web sites run WordPress on top of MySQL so I need to add that back.  Here’s what I did:

Webmail is in the “nice to have in travel emergencies” category.  But the Roundcube webmail is also the best place I’ve found to replace some of the email-forwarding, email-exploder capabilities that went away in the transition from Snow Leopard to Mountain Lion.  So I put it back.  Conceptually, it’s an email client running on the server that can talk to the mail server just like any other client.  It just happens to use the web as its user interface.  Here are useful links to get you started.

Once Roundcube is running, and supporting filters you can…

Here are the steps I would go through to create an alias friends@bgnws.com

This was one of the hardest debugging jobs in the whole transition.  Now that I’ve been through the manual install of this system, I can see why Apple dropped it.  It must be a support nightmare for them.  But I host a couple of very active lists and I have to have this capability, losing it in the migration is a non-starter for me.

For most of you, you can stop here.  Your email lists will be working on your new server.

I wanted to run parallel lists under two domains, keeping the lists running under the old domain name until I had the new version up and tested on the new server and then cutting all the list members over to the new list.  If you have a low-priority list where participants can be down for a while, this is probably overkill.  Just let them know that things are going to be broken for a few days, take the lists across, redirect the domain when you change the main DNS MX entry for email and have done.  But I was trying for 100% uptime during the transition.  I bounced my users over a few rocks during this process, but we were up all the time.

To do email lists under multiple domains in Mailman, you have to pay attention to Alias Maps.

Update, late 2013:  Preparing for the NEXT upgrade — the road to Mavericks

I’ve started a thread over on the Apple Support Community to see if there are any impacts to these additions with an in-place upgrade to Mavericks.  It took me a really long time to get from Snow Leopard to Mountain Lion (my attempt to get to Lion never succeeded).  I’m hoping that the road won’t be quite as bumpy this time, but we’ll see.  Here’s a link to the thread.

So far it looks like Roundcube may need to be updated, although the update looks pretty cool.  One of the appealing things is that address books may be available in the Roundcube environment.  That alone makes it intriguing.