I just went through an agonized decision-making process to upgrade my MBP.  I knew that the cool new CPUs were coming this summer, but then Apple threw the “Retina” curve-ball at me.  I chewed and chewed on that and finally went with the old-style machine because:

So I finally got it home and just ran a “run Logic Pro” comparison between the 2012 MBP and the 2010 MBP and the results are exactly what I had hoped for.  Logic nicely spreads the load across all the cores in the new CPU.  The result is a MUCH cooler-running machine, whereas the 2010 MBP kicks its fans on and starts heating up right away.

Here’s the picture that tells the tale.  Same song, at the same place, running on the two machines — these are screen-grabs of the CPU displays.  Sure, your mileage may vary.  But I’m really pleased with the first impression.  This is seeming like a machine I can really truly rely on in a live setting. 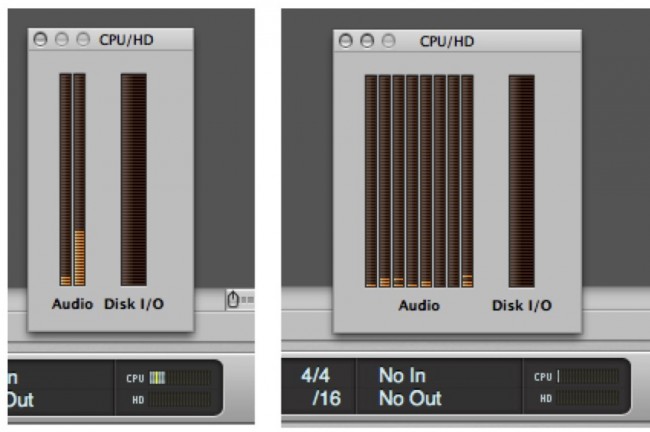 I did make one choice that I’d avoid if I were doing it over — I’d skip the hi-resolution screen upgrade.  Yep, even on the old-style MBP you can opt for a slightly denser 1680 x 1050 display rather than the normal 1440 x 900 one.  It turns out my 60+ year old eyes struggle with the now-smaller font size.  Probably means it’s time to upgrade the trifocals.  🙂