Definitely a narrow-audience scratchpad post.  We love our electric Polaris Ranger EV utility vehicle here at Prairie Haven.  But putting water in the batteries is not a lot of fun.  Messy, tedious, slow, etc.  So today’s project was to put a battery watering system in.

Everything is fine and we still heartily endorse this gizmo.  Battery watering now happens once a month. END_OF_DOCUMENT_TOKEN_TO_BE_REPLACED

A scratchpad post as I diagnose and repair an electrical fault in our Power Trac PT-1850.  Pretty sparse right now, just starting. END_OF_DOCUMENT_TOKEN_TO_BE_REPLACED

We planted the last prairie field this weekend — here’s Marcie’s post about the whole thing.

We rassled with the manual for the Truax Flex style drill — the model number of the one we were messing with was FLX-88, but I think these comments apply to any FLX model grass drill made by Truax. The problem I had was that the manual for that drill is written for people who aren’t idiots. The audience for the manual probably care about the stuff that’s in it, but all I wanted to do was hook up the drill, put seed in and plant. The manual doesn’t help with that at all, so this is my replacement — mostly for the next time I use the drill, but maybe it will help you too.

Puzzle Number One – What are the “transport locks” they’re talking about?

The manual has a dreadful picture (and only one) of the transport locks. So here are a few more, that make it obvious what’s going on.

This picture mirrors the one in the manual;

This picture shows the lock turned so that you can see it. Ok, so those have to come off before you start using the drill. Hook up hydraulics, raise the drill a little, take the blocks out. I get that. 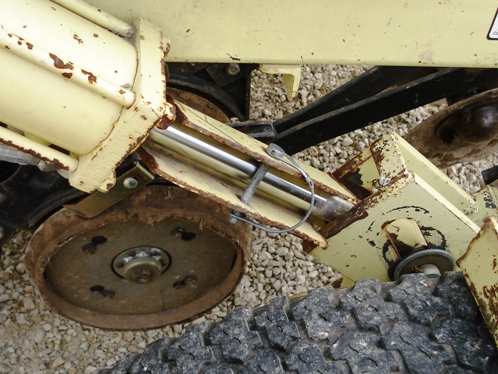 Here’s just a stupid thing — I found it was a lot easier to rotate the jack and leave it on the drill than to pull it off. All the holes are set up for that. Here are two pictures to show you what I’m talking about. 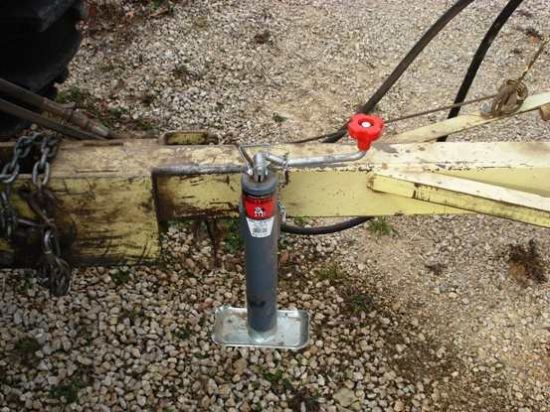 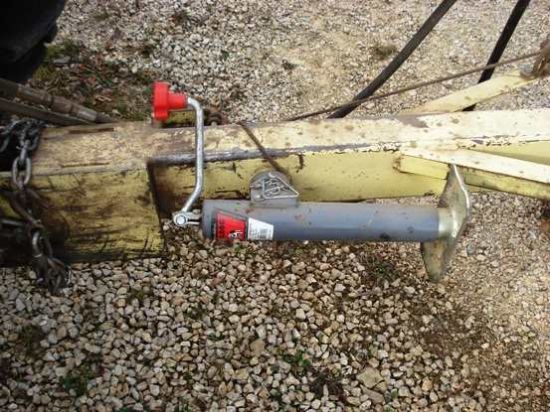 I had a heck of a time figuring this out. Fortunately Dan Olson was home and clued me in. But the manual provided no hint. Here’s the deal.

There’s a little pin on the drive wheel that makes this happen. Here’s a photo of the pin the way we got the trailer. See? It’s pulled further out; 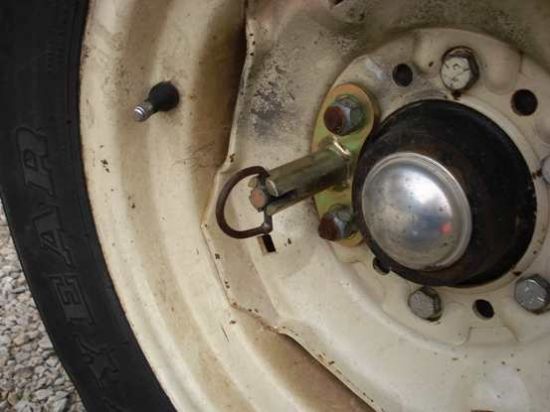 And here’s a picture of it in the position where the chains and gears and stuff will actually do something. It’s further in; 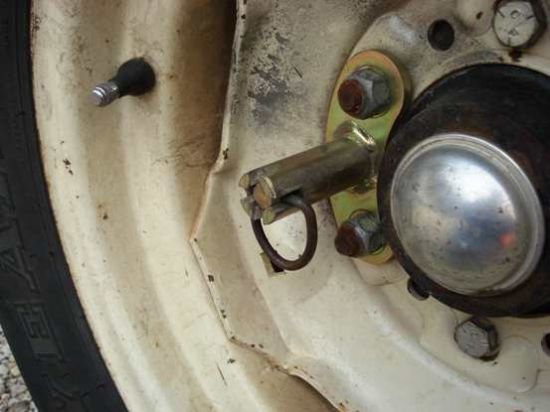 Here are pictures of the back side of the wheel that shows the opposite end of that pin. This first photo is in the non-engaged position (the one you would use to tow the drill to a new place). When the wheel goes around, the pin missed that ratchet thingy and as a result none of the gears turn; 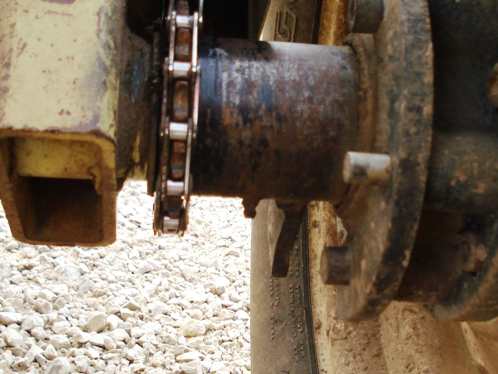 Here’s a picture of the engaged position. Now the pin sticks out far enough to catch that ratchet thingy and the gears and bobbins and whatchacallits all go round and round;

Sheesh. We didn’t check this before we started. The lads at the DNR told us that the drill was set up for the lowest seeding rate, and we believed them. Not. It was set for the MAXIMUM rate, so we dumped about a jillion dollars worth of seed into about a quarter mile of furrows before we realized what was going on. Moral to the story — ALWAYS check.

Here’s where to look — behind this here silvery dingus. It swings forward; 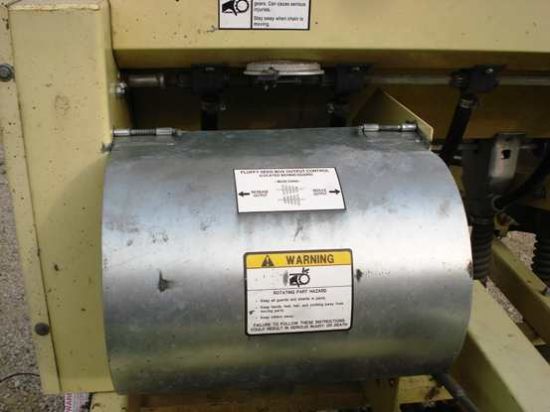 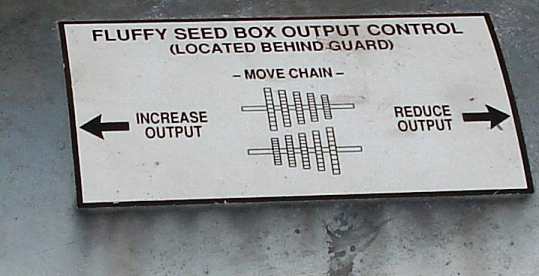 We tried the drill on the far right side for a while and concluded that it was too light, so we moved up one notch. Here’s a picture of the way we had it set up; 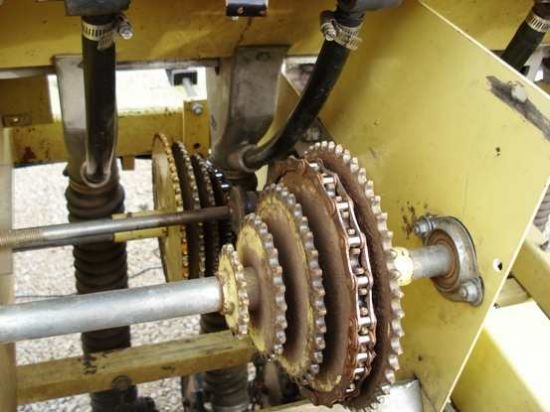 You change the chain by lifting that little idler-wheel up off the chain, fiddling with the chain until it’s on the right pair of sprockets and then moving the idler over so that it centers on the chain in it’s new position. This is a picture showing how the idler swings up away from the chain; 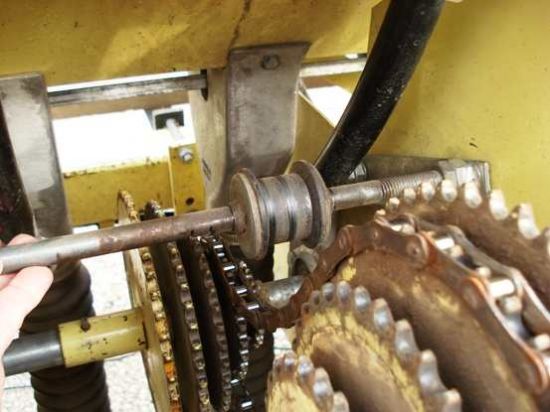 We wound up using the drill ONLY on fluffy seeds. The small-seed box fed the seeds WAY too fast, even on the slowest gearbox setting. If I wanted to make a lifetime hobby out of this drill, I would have fiddled with that adjustment too. But I don’t. If anybody has messed with that set-up and wants to add a comment to this, feel free. But we just skipped it.

Editorial Comment — None of this information is in the manual

I know that for farm-equipment hotrods, this looks like the ravings of an idiot. But me I’m just a weekend warrior and figure maybe you are too. In which case, this little write-up might save you some time and aggravation.

The big reward — here’s a picture of the field as I’m dragging the drill behind TracDor. 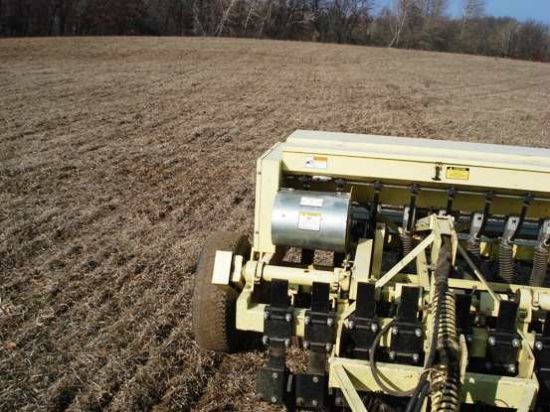